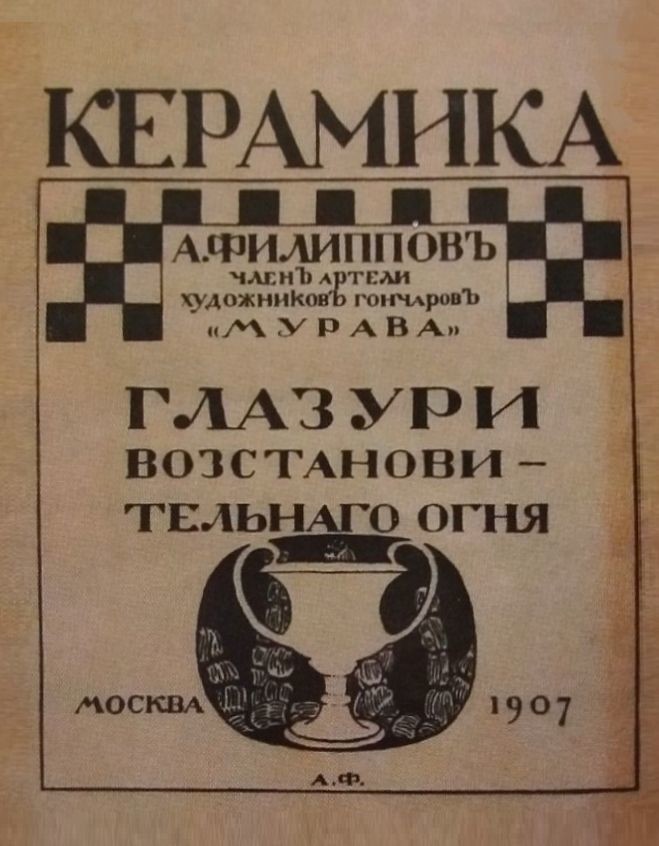 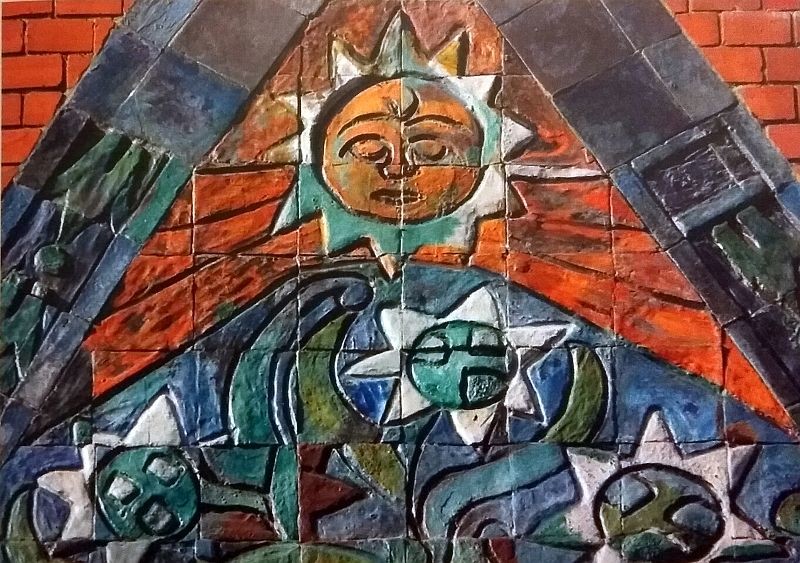 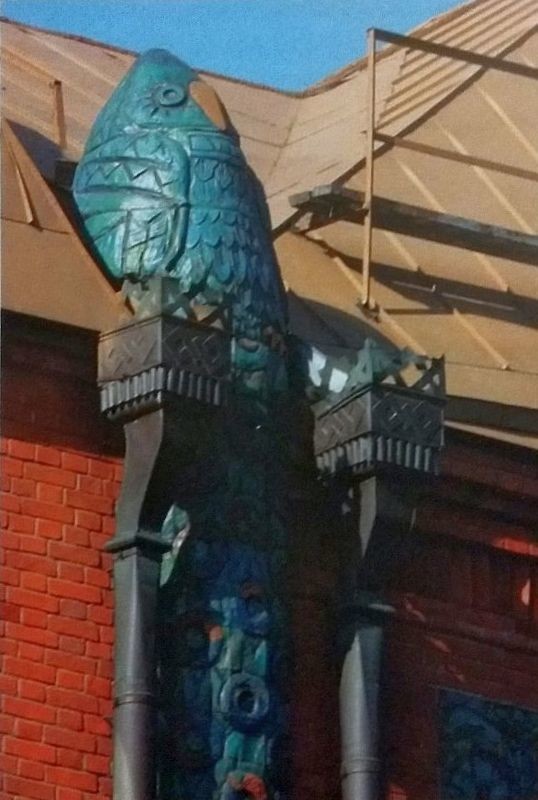 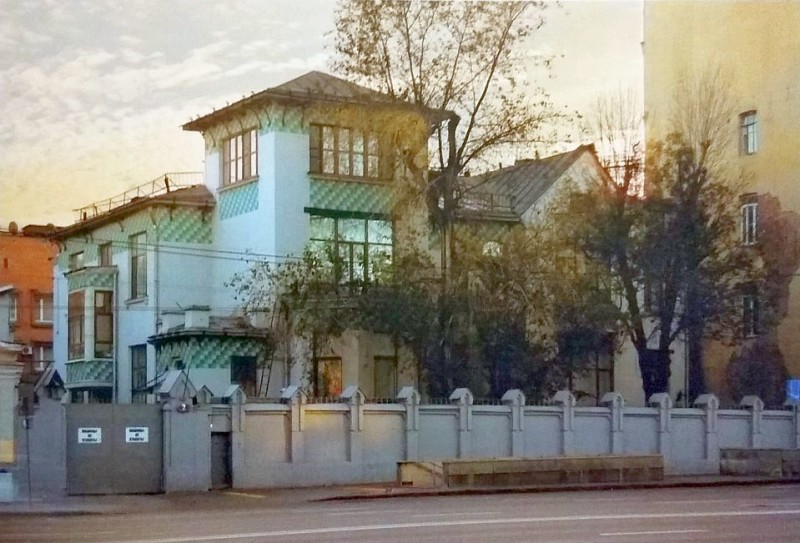 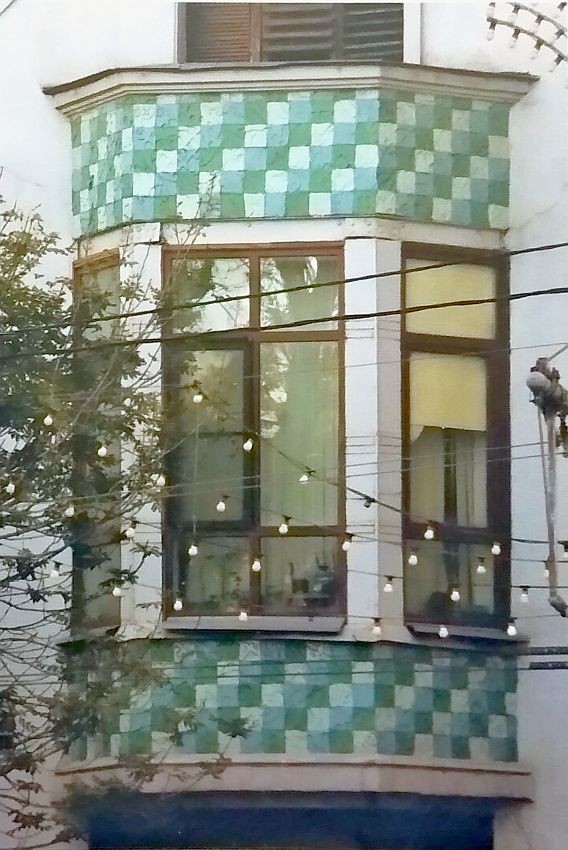 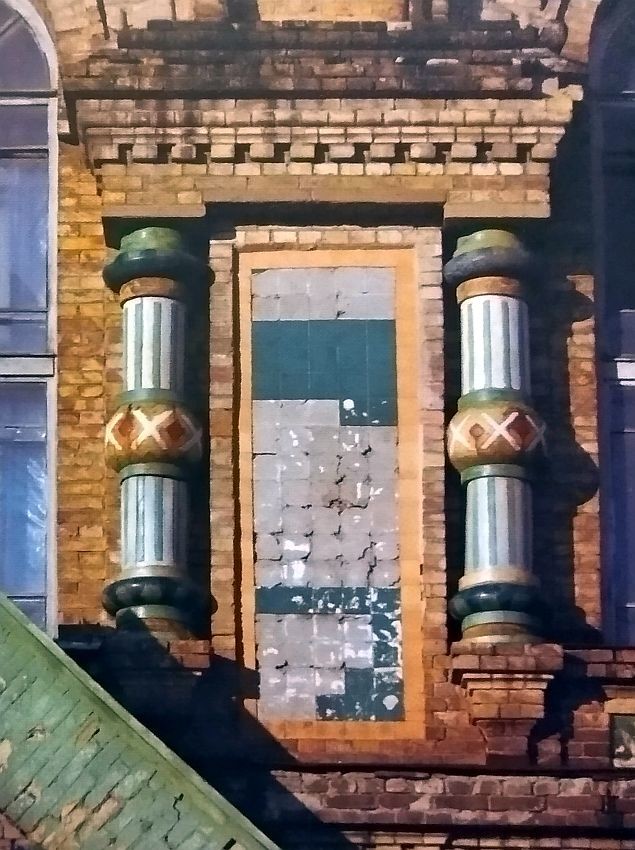 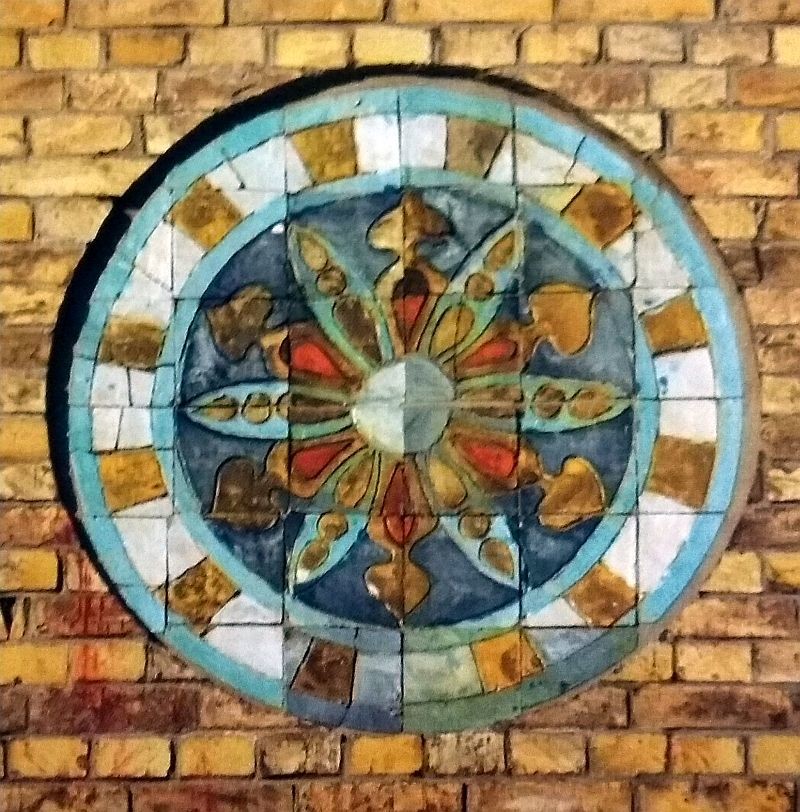 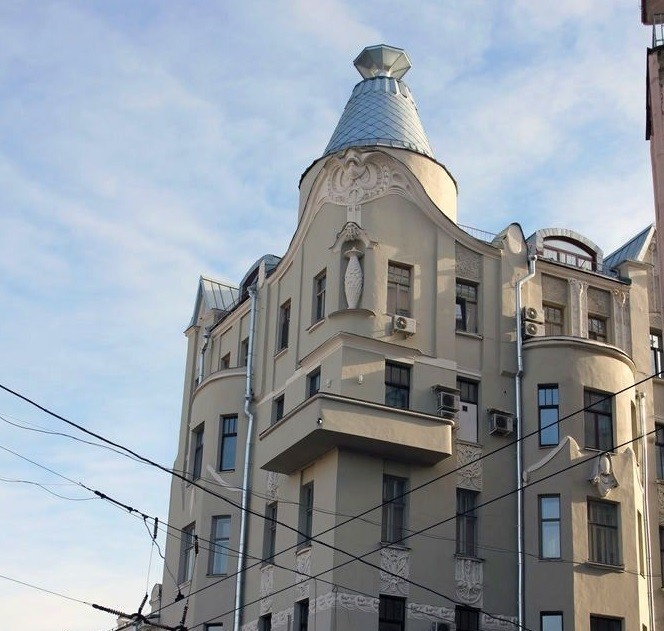 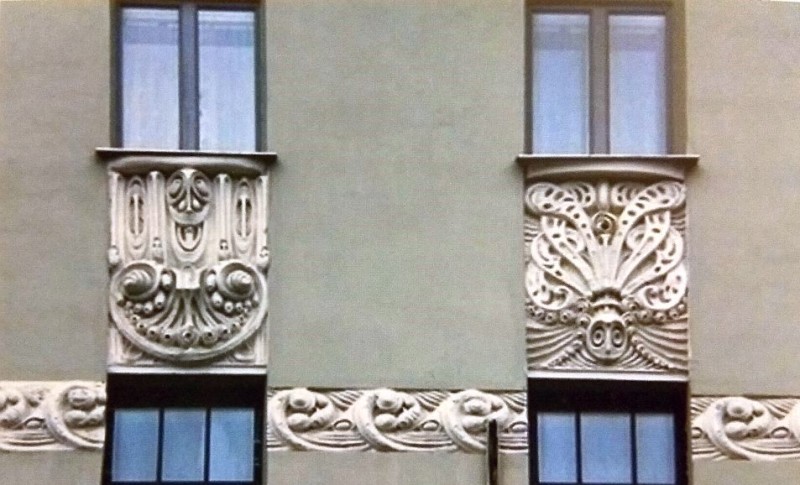 Facade murals of Murava art workshop. Savva Mamontov’s Abramtsevo factory inspired many artists and lead to the emergence of several ceramic enterprises. One of such enterprises was the Murava Artel (where ‘artel’ means a cooperative association of craftsmen) founded in 1904 by Alexei Vasilyevich Filippov (1882-1956). The Artel had students of the Stroganov School – artists of applied arts, graphic artists, sculptors, as well as potters and technologists – as its main personnel. The workshop was headed by three enthusiasts in ceramics: Alexei Filippov (who had worked at Abramtsevo previously), Peter Galkin and Mikhail Egorov. The most notable artist of the workshop was Sergey Vasilyevich Malyutin (1859-1937), who worked for princess Tenisheva at the Talashkino estate and created many sketches in the characteristic Talashkin style.

Filippov knew ceramics perfectly. He set before his employees the task of deeply studying the ancient Russian pre-Petrine architectural ceramics, believing that the tiles of Ancient Russia could become a standard in the creation of architectural majolica by contemporary artists.

However, the artists of Murava were not going to revive the medieval technology, their ambitions lay in returning glazed ceramics to the significant place that it occupied in the architecture and life of the Russian Middle Ages. Advertisements and active promotion of ceramics served these goals.

In 1907, on the basis of his experiments at Murava, Alexey Filippov published the book Ceramics. Glaze of reductive fire. The book was an important contribution to the promotion of ceramics.

A sort of an impetus for the creation of the Artel were Vrubel’s words about “the impossibility of translating his ideas due to the complete absence of people with artistic development and knowledge of ceramic technology.” The Apollo magazine wrote the following about this: … “These days, Murava has its own workshop, where, in addition to the closest employees performing artistic and technical work, the opportunity to work in ceramics is given to everyone.”

As we have already mentioned in our articles, at the end of the 19th century, usage of ceramics in Europe and in Russia expanded significantly – it often began to “take to the streets”, transforming the facades of houses and turning from decorative and applied art to the monumental one. Murava went further than Abramtsevo in their research. Artists of the Artel paid attention to the quality of the clay shard and the durability of the glazes. While experimenting, they used different clays, including Gzhel. Contemporaries noted the high quality of the Artel’s facade murals in comparison to other manufacturers: “Murava makes advances to all builders who are looking for a new beauty in architecture, beyond the architectural cosmetics of plaster. Majolica is an eternal material that gives richness and expression to the building. How much vulgar tastelessness has been brought in by modern houses with foreign market tiles that fail to weather our rains and frosts… In the field of art ceramics, Murava is practically the only workshop that can solve this difficult task: merging the decorative and beautiful with durable and resilient.”

Unfortunately, despite the workshop’s rather impressive list of completed works, not many buildings with the Artel’s facade murals remain. One of the remaining houses is probably known to everyone: the Pertsovs’ House on Prechistenskaya Embankment built by architect N.K. Zhukov based on S.V. Malyutin’s sketches.

Malyutin’s architectural sketches showed a very vivid individual interpretation of the Neo-Russian style forms, based on drawings of northern spinning wheels, carved gingerbread boards, antique fabrics, embroideries, etc. It is no coincidence that Malyutin’s watercolors, mesmerizing with their color and Old Russian forms, were highly appreciated by Sergei Diaghilev: “I remember very well the impression that his watercolors for Pushkin’s Tales left in me… The beauty and novelty were absolutely seductive; watercolors seemed to be pieces of some expensive and rare materials, and besides, these were the works of a Russian man, not only knowing and loving the Russian fairy tale, but also emerging from some other world, having nothing to do with the cosmopolitan environment to which most modern and prosperous artists belong.”

The sketches of the facade murals for the Pertsovs’ house made extensive use of themes, motifs, and details of the artist’s Talashkino works – finishing of the Teremok in Flenov, interior items and architectural sketches. As time passed, the unique, one of a kind image of this building became the embodiment of the Art Nouveau Moscow. The contemporary utopian dream of reviving the picturesque and colorful old Russian architecture with its tents and turrets, piers, balconies and multicolored tiles was vividly and organically embodied in the house. The appearance of the house and its interiors were influenced by the paintings and decorative works of Viktor Vasnetsov, Ivan Bilibin, Konstantin Korovin and many other artists and architects of the Neo-Russian style, but they were influenced, as it were, through the prism of Malyutin’s Talashkino experience. “Malyutin the dreamweaver” the well-known art critic S.K. Makovsky rightfully remarked in 1900. And this quality is fully embodied in the appearance of the Pertsovs’ house.

All facade murals mainly consist of square tiles, however, they are characterized by a greater relief of images than Abramtsevo products, as well as an eye catching combination of majolica-lined planes with sculptural and architectural elements of the house. The Murava facade murals differ from the Abramtsevo tiles in their greater color intensity, its opacity, and the relief of the images. The Murava ceramics created by Malyutin became a striking example of the incarnation of Slavic folklore and Russian fairy tales in Russian architectural ceramics at the beginning of the 20th century.

The Pertsovs’ house became a landmark immediately after construction and actually brought Murava fame and new commissions. The biggest order was an apartment building in St. Petersburg, owned by P.I. Koltsov and V.F. Doroshevsky. The building was very close in its decor and architecture to Pertsovs’ house, and the resemblance became more apparent when, in 1909, the upper parts of the house were decorated with multi-color facade murals made by the Murava Artel. The house was so unusual for St. Petersburg and had such a bright and multi-colored facade that it was nicknamed The Dream House. Unfortunately, the house was badly damaged in 1942 from the bombing and has not been restored.

Other surviving facade murals of Murava include the ceramic frieze of V.S. Kazakova’s mansion on Sadovaya-Spasskaya Street (unfortunately now painted with oil paint), the ceramic decor of the Women’s Diocesan School in Lubny, and the amazing relief finish of the apartment building of the Church of the Holy Trinity “on Gryazekh” (it is also called the House with the Beasts), a large relief decoration of Y.M. Filatov’s house on Ostozhenka.

The works of the Murava workshop incorporated the most noticeable trends in the decorative and applied arts of the Russian and Neo-Russian style and were not completely free from the influence of recognized luminaries (Vaulin, Vrubel and others), however, in the best works of the Artel these trends were melted into a new expressive artistic whole. Although there are few architectural works of Murava left, it can be said that the Artel was one of the largest ceramic art enterprises in Russia from 1900-1910. In 1918, the dissolution of the artel was officially announced, and in July of the same year, its members organized a ceramics department at the Union of Applied Art and the Art Industry.

Remaining faithful to his beloved art until the end of his life, A.V. Filippov became the successor of all the ceramic art workshops in Moscow engaged in architectural ceramics. 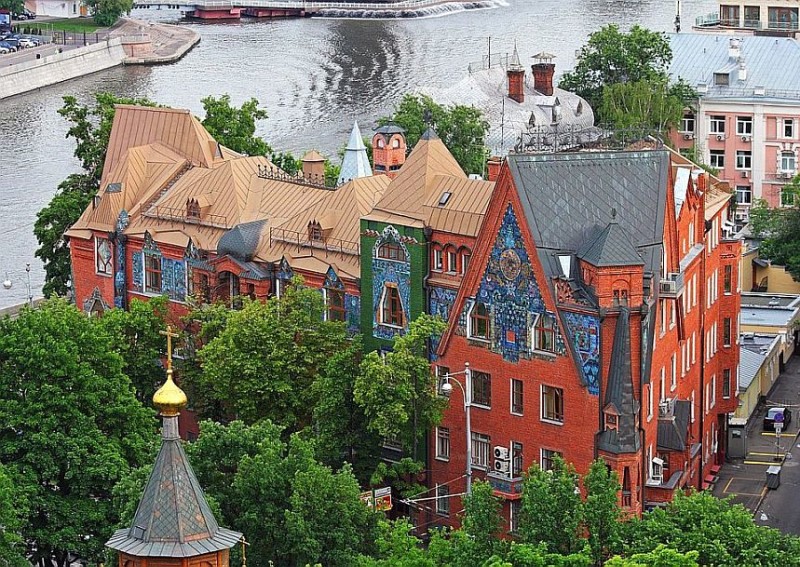 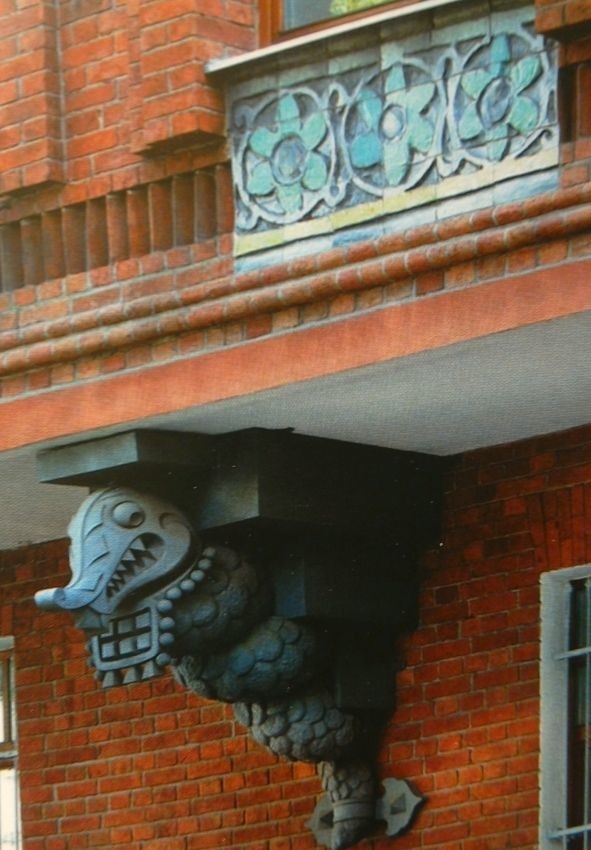 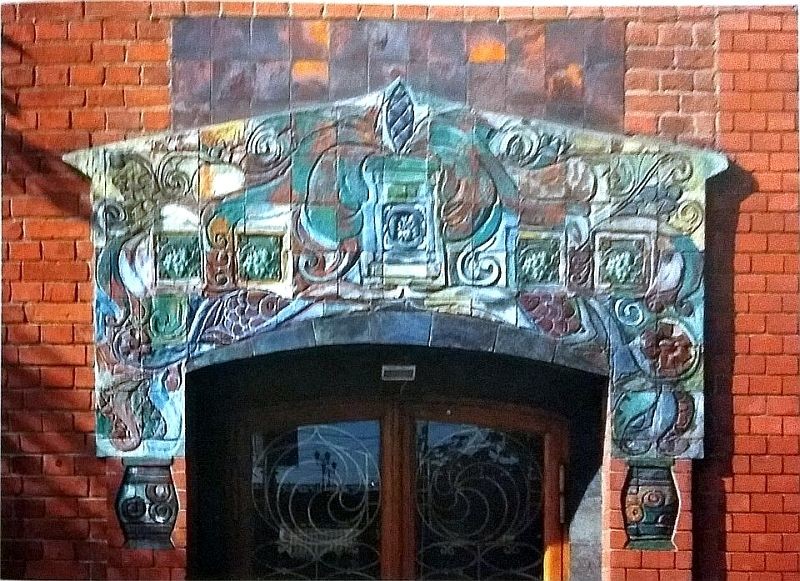 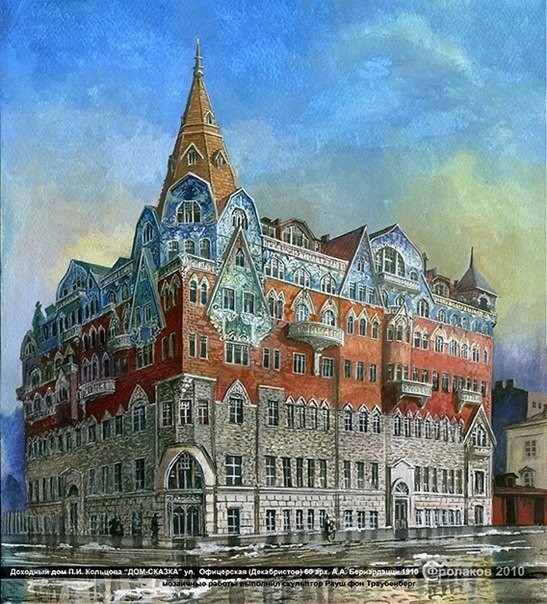 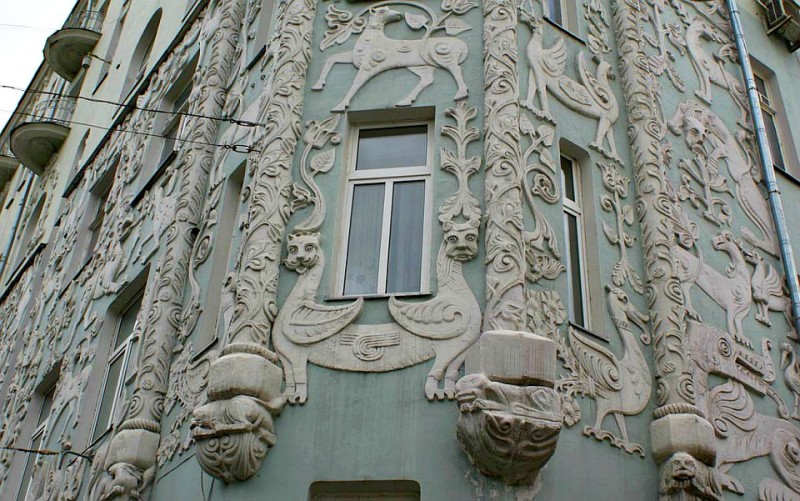 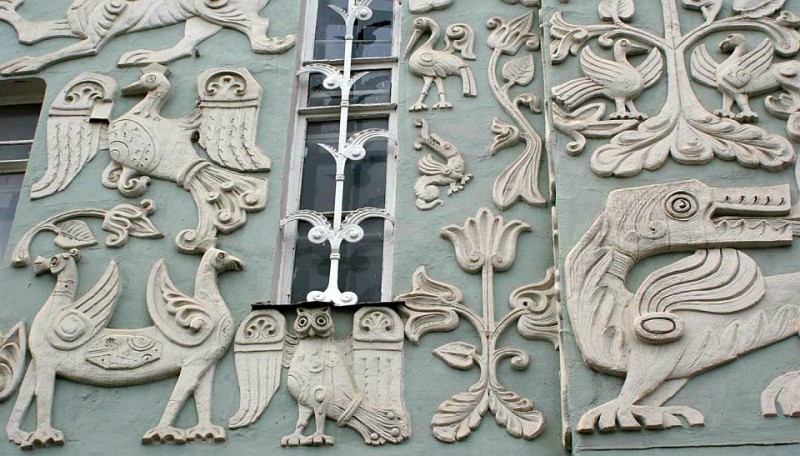 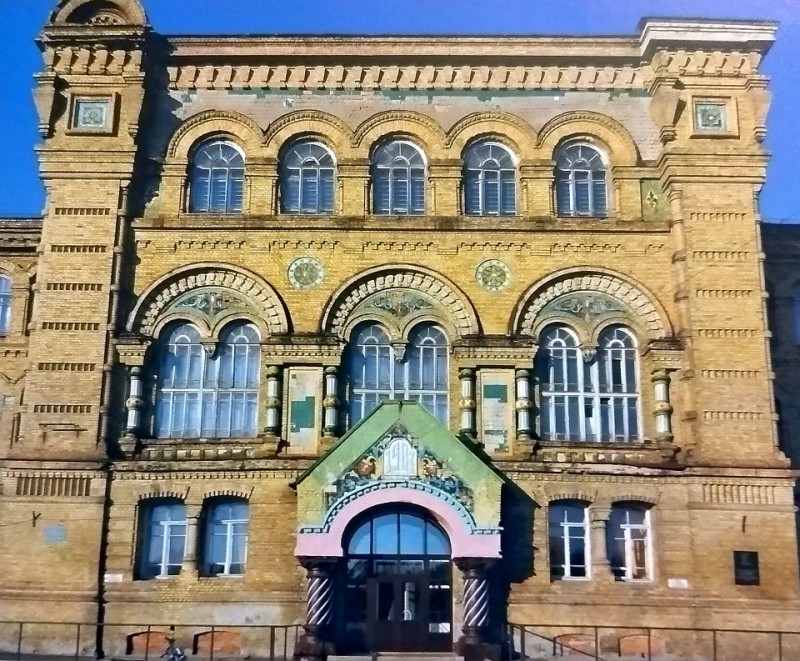 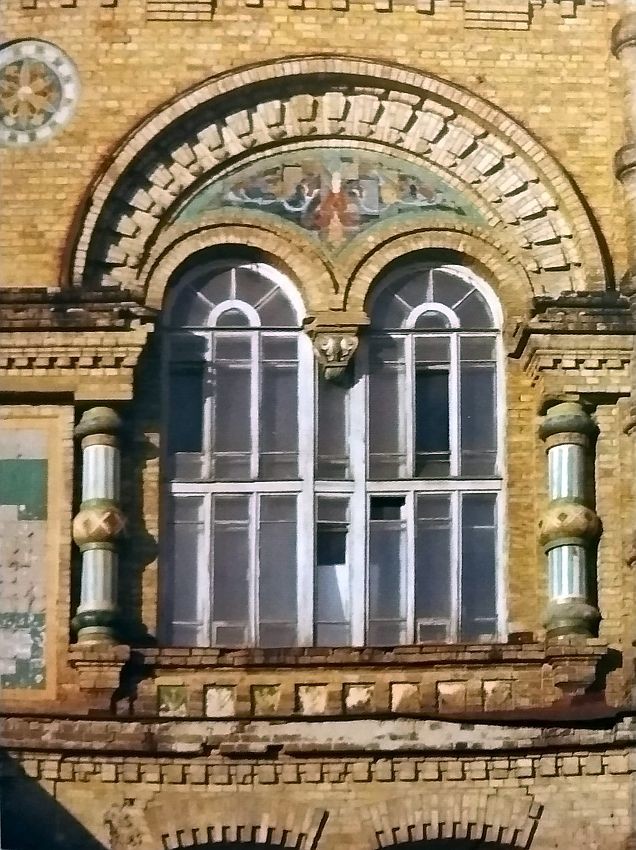 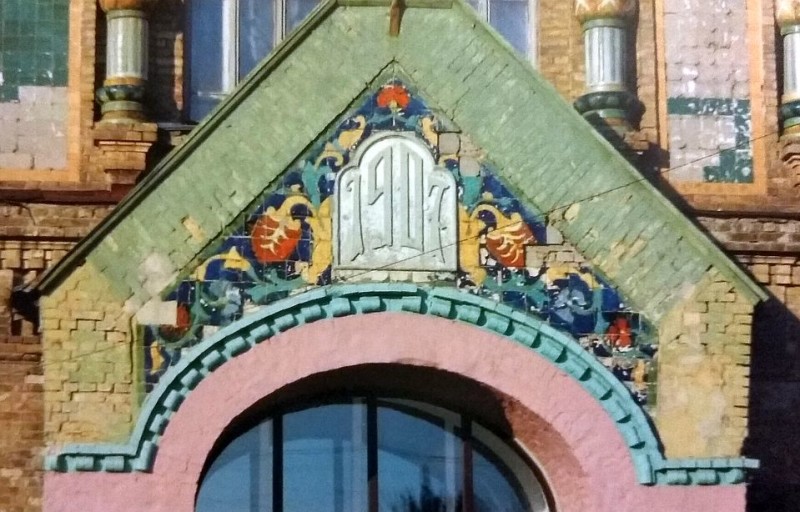 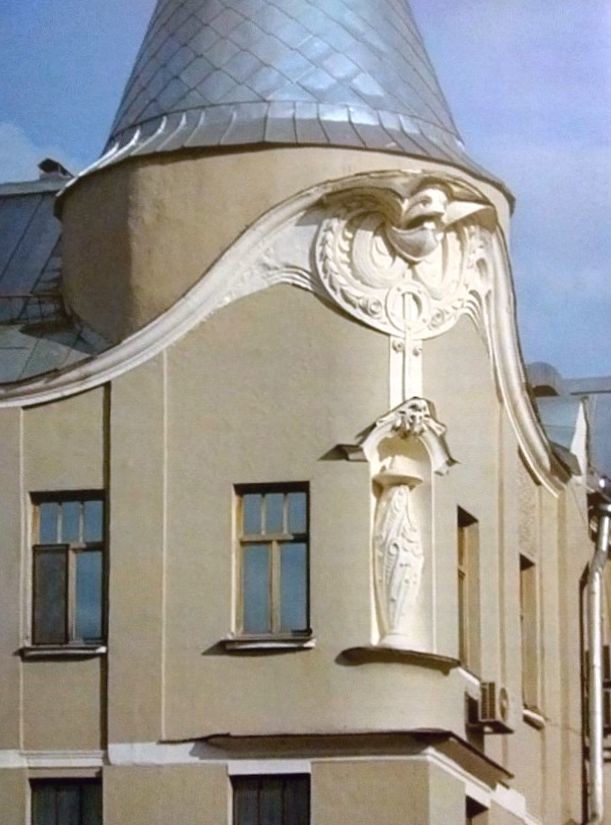