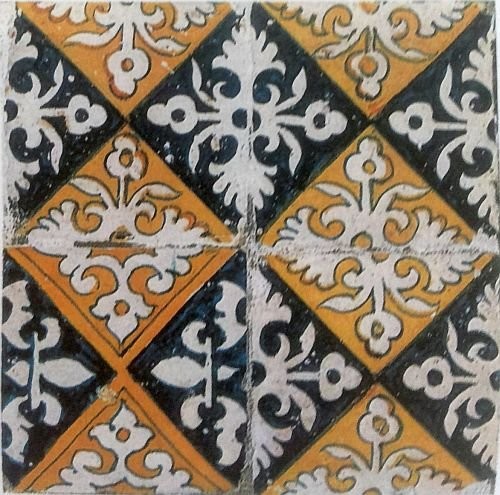 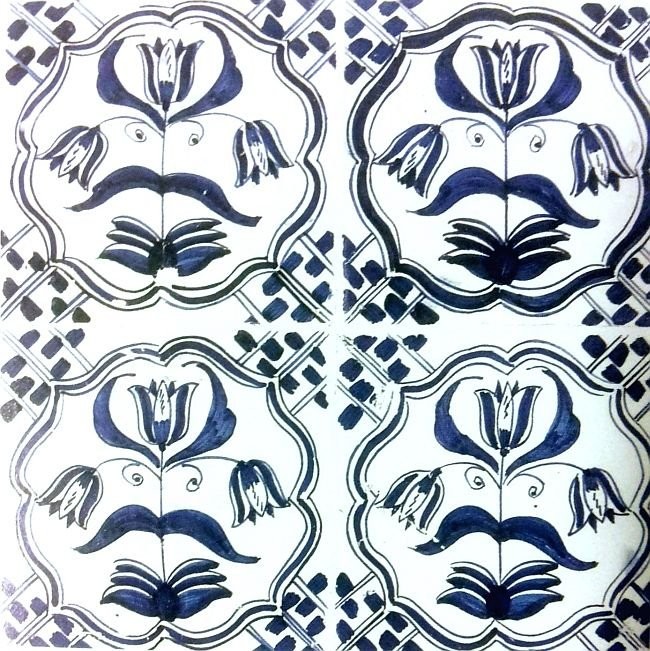 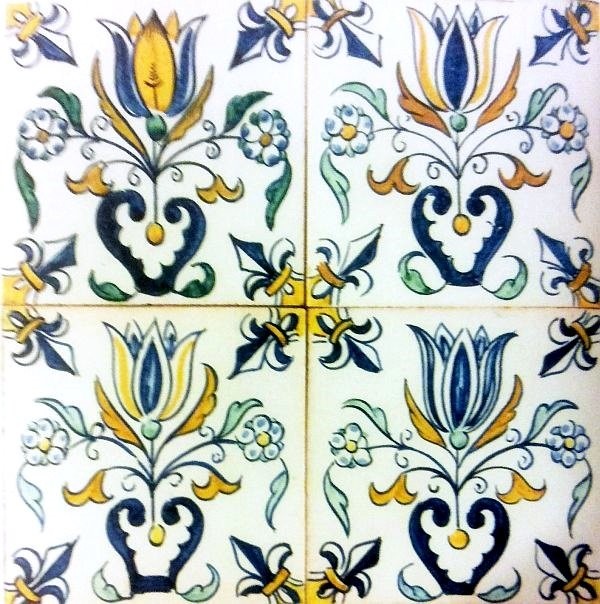 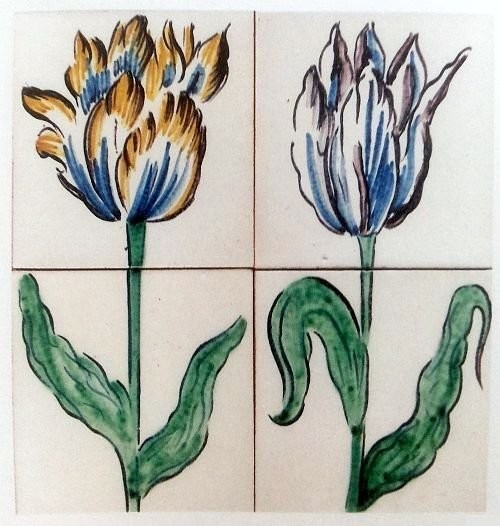 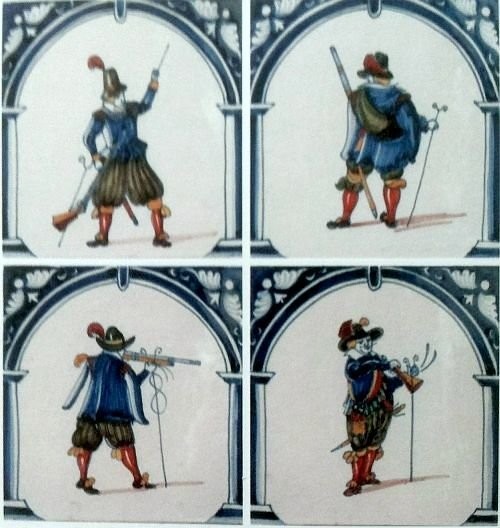 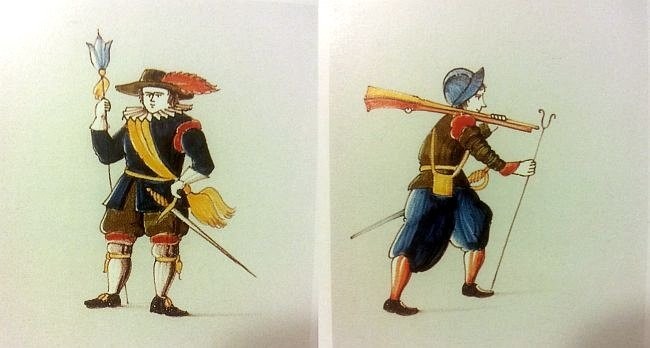 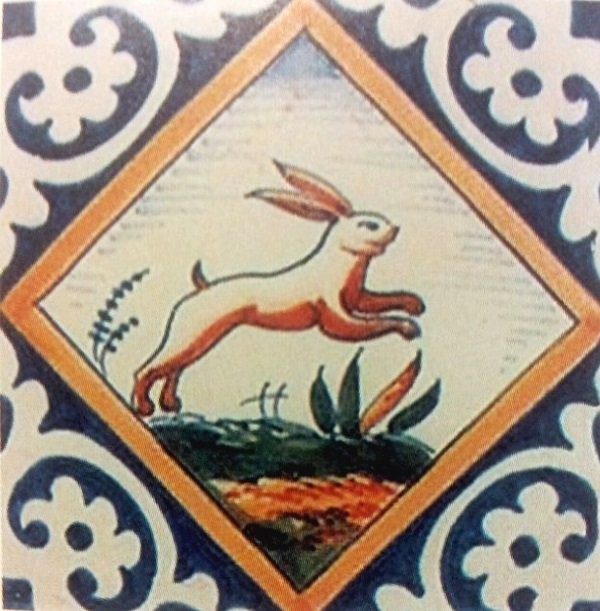 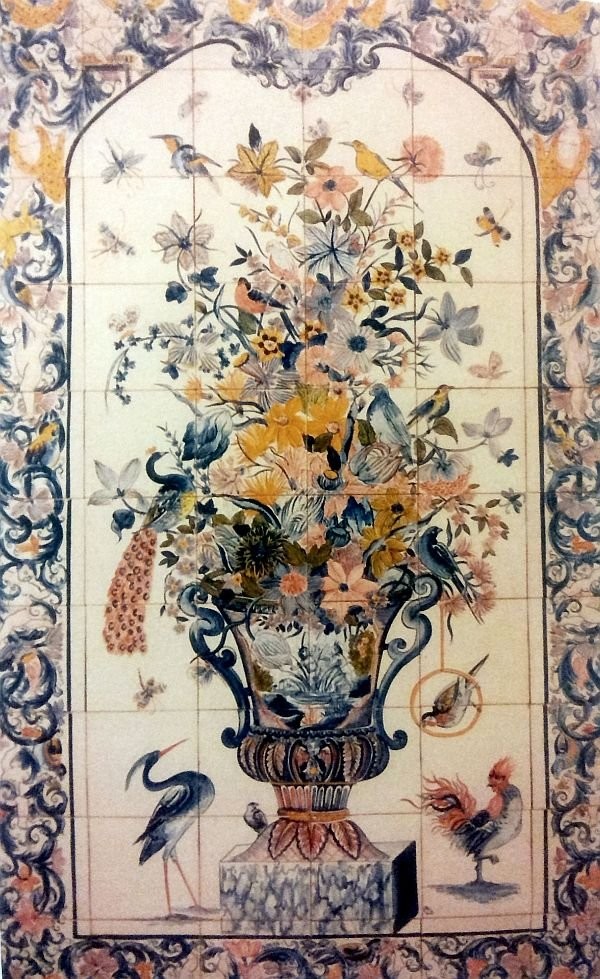 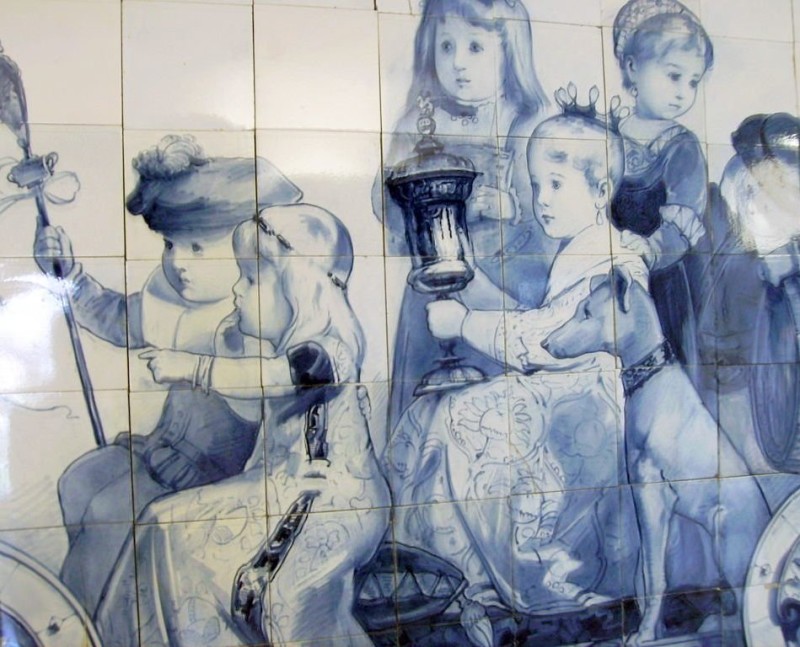 Delftware. Since the discovery of America at the end of the 15th century, Holland has been the gateway through which the main trade routes to the Atlantic Ocean passed. The Netherlands began to rapidly grow rich, and Dutch merchants to amass the main proceeds from transatlantic trade in their hands. The golden age of Holland began, which fell on 15th-16th centuries, the peak of the Renaissance. Many Italian masters moved to Holland and Belgium during this period, following the movement of trade from the Mediterranean to the Lower Lands, – to the lower Rhine, Meuse and Scheldt. They brought the Italian majolica technology with them. Guido Andreas, a ceramist from Casteldurante (Urbino), founded a workshop in Antwerp. One of Guido’s sons opened his workshop in Middelburg (Netherlands) in 1564. It was the very first ceramic workshop in Holland.

Initially, Delft artisans did not engage in pottery, but the closure of the breweries and the demand for new products brought from the Mediterranean region, as well as from the east, from China and Japan, by the end of the 17th century, led to the replacement of the breweries with pottery workshops. This was the beginning of the rapid development of Dutch ceramics, which over time became a household concept, defining a separate style – delftware.

Chinese porcelain imported to the Netherlands with goods of the East India Company cost a fortune and, without any exaggeration, was very beautiful. This could not leave Delft ceramists indifferent, and they tried to imitate the Chinese style on tiles. This was the period of the so-called ‘china-mania’, accompanied by the active use of blue cobalt on a white background and Chinese storylines on the tiles.

In our short material we would like to touch upon the main motifs of Dutch tiles from the XVI century to the present day.

The early Dutch wall tiles of the mid-16th and early 17th centuries are very similar to Mediterranean floor tiles. They are characterized by a rich floral ornament made in the colors of the Italian Renaissance – green, orange, yellow and blue-violet colors. Patterns of Moorish textiles from Spain were repeated in the tile ornaments.

After going out of fashion, they were replaced by polychrome tiles with geometric ornaments in the form of hexagons and rhombuses, framing images of animals and people. In 1620, the import of blue and white Chinese porcelain made multi-colored tiles unpopular, however, it increased the importance of thematic plots. The grapevine in blue and yellow, made in the Spanish style, has become a popular ornament. This design was characteristic of the Delft tiles of the second half of the 16th century.

One of Delft’s most prominent methods was using the so-called corner motifs, which stylistically collected tiles with many different images into a single finished ‘carpet’. The early ornamental ‘arabesques’ were simple, but connected together by the same angular elements into a single whole, creating a complete image with a high degree of decorativeness. The motifs of a bull head in different variations were popular.

Delft’s equally common motifs were flowers and berries, which turned home interiors into real gardens. Starting from 1610, they appeared along with the motif of vases. Tiles were framed in the Spanish style or made in the form of an Italian medallion. Flowerpots with scalloped balusters came from Italian majolica or from a still-life painting, very beloved in the Netherlands at that time.

Between 1625 and 1670, these picturesque ‘flower beds’ of roses, lilies, carnations, irises and narcissi covered the walls of Dutch houses. Tulips have become the most favorite flower in Holland and for a long time remained a very popular tile motif. Gradually, the usage of the ‘carpet’ ornamentalism waned, and from the beginning of the 17th century until the middle of the 18th century, the focus started to move to the central image of the panel.

Another popular Delft plot from the 17th century were biblical scenes. Tiles with biblical compositions clad fireplaces, hearths and even bedrooms. The themes of murals usually featured stories from the Old Testament and the Gospels. Artists were inspired by 15th century biblical engravings , so it is not surprising that they reproduced them in their paintings, though they made the old drawings significantly more complex. Sometimes artists, when using biblical scenes, did not detail their paintings too much and achieved a decorative effect by fitting images into circles and ovals according to the fashion of that time, and decorating corners with floral ornaments.

The eighty-year war of independence from Spain left its mark on the Dutch tile motifs. Some of the most common plots of the late 17th century were the images of soldiers, horsemen, battle scenes and other military compositions. In the second quarter of the 17th century, a fashion for marine compositions appeared. Waves, schooners, dolphins – this is not a complete list of elements of Dutch sea landscape art, which were used on tiled panels more and more often.

Then single ships began to appear as independent decorative elements. In essence, it was the maritime theme that became the trademark of Dutch tiles in Russia, largely thanks to Peter the Great.

In a country dependent on the sea, it is inevitable that the mythological creatures, Neptune, tritons, Nereids, mermaids, krakens and mermen, make their appearance in folklore and, as a result, in paintings.

More than a hundred species of birds, real and fantastic, were drawn on Dutch tiles, – another extremely common motif. The main sources of inspiration for the artists were Aesop’s fables and The Animal Garden by Joost van den Vondel, an outstanding Dutch poet and playwright of the late 17th century.

The landscape imagery on tiles of that period was quite rare. However, the manganese glaze discovery allowed artists to control the clarity of the lines, which is necessary in drawing architectural structures. This expanded the masters’ capabilities in detailing the landscape and such tiles began to appear more often.

Often panels, or murals, were used to decorate fireplaces and hearths in middle-class homes. In the summer, when fireplaces were not lit, pots with flowers were placed inside the firebox. That started the tradition of depicting flowerpots with flowers on panels for fireplace cladding. The use of such panels in the interior made it possible to create large-scale decorative objects.

Delft flourished and its pottery spread throughout all of northern Europe. The Delft masters’ tiles were so popular that they began to be copied, and this way of decorating the interior was called delftware. Almost to this day, tiles in southern Europe are called ‘majolica’, and in northern Europe ‘delftware’.

However, by the end of the 18th century, English ceramists, who were also copying Dutch tiles along with Chinese porcelain, made a breakthrough in technology and released their tiles with a factory method of drawing, the so-called transfer-printing. From this moment the decline of Delft ceramics began. The Dutch began to close their workshops, unable to withstand competition with the English technological manufacturing.

And only nearly 100 years later, in 1876, ceramic production was revived in Delft with the opening of the Royal Manufactory of Delft Porcelain with characteristic blue and white motifs. It was the cobalt range of the Delft porcelain painting that became the model for the Russian ‘kafel’ (tiles), and by the middle of the 19th century it had established itself in Gzhel.

Today, Delft’s main motifs are the same – landscapes, decorative panels with very naturalistic monochrome paintings, portraits in floral vignettes, and much more. However, in Delft, polychrome glazes are practically not used, and the hallmark of delftware is a complex cobalt painting on white porcelain or faience. 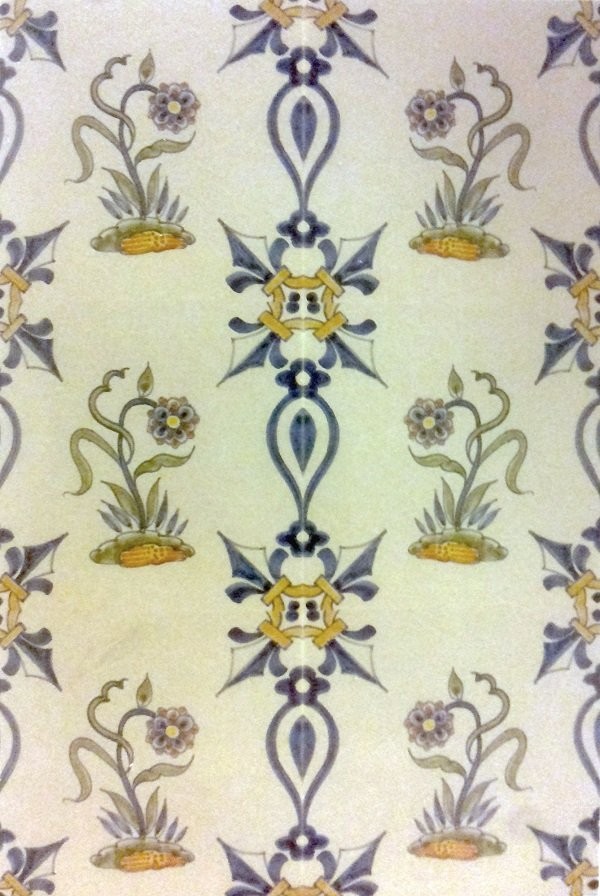 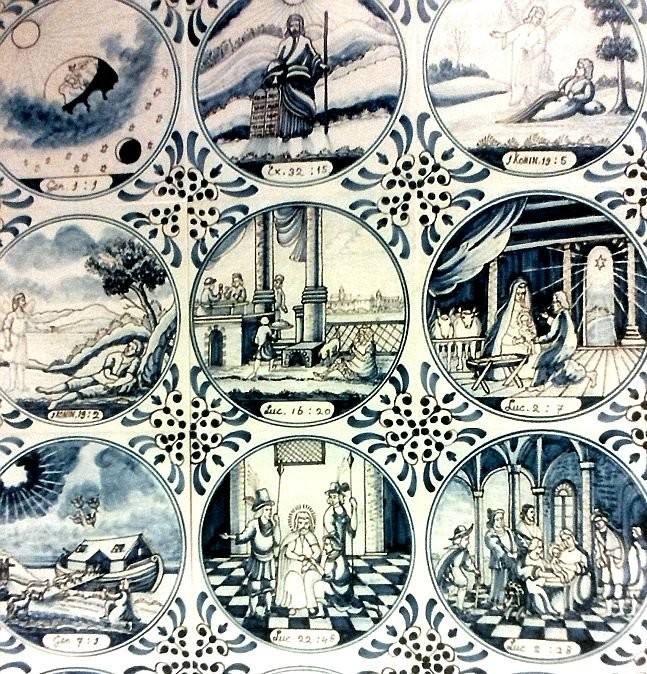 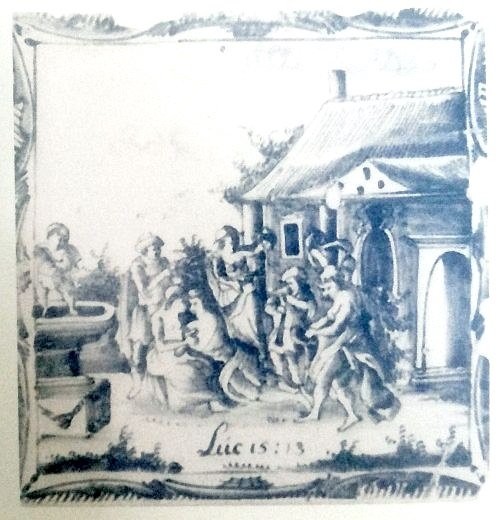 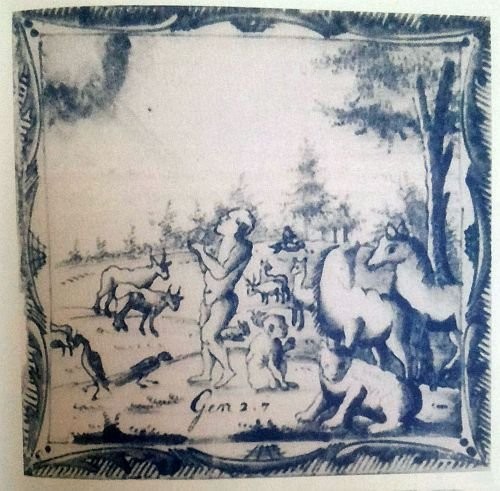 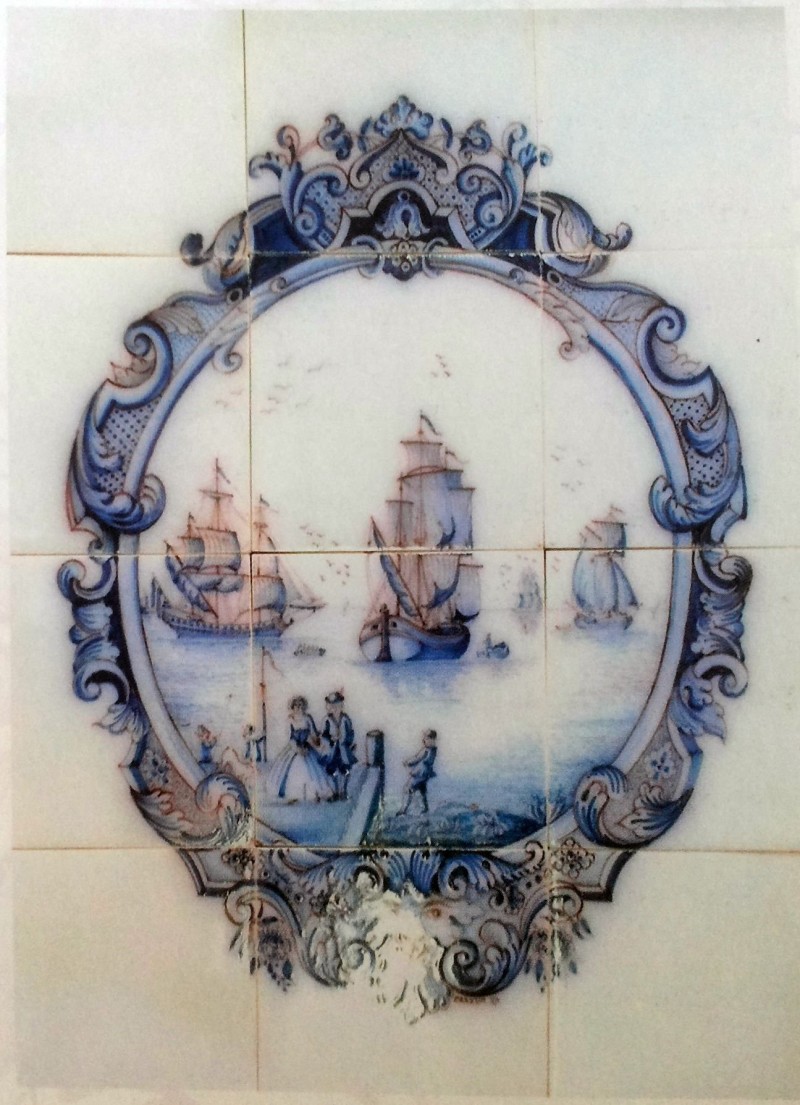 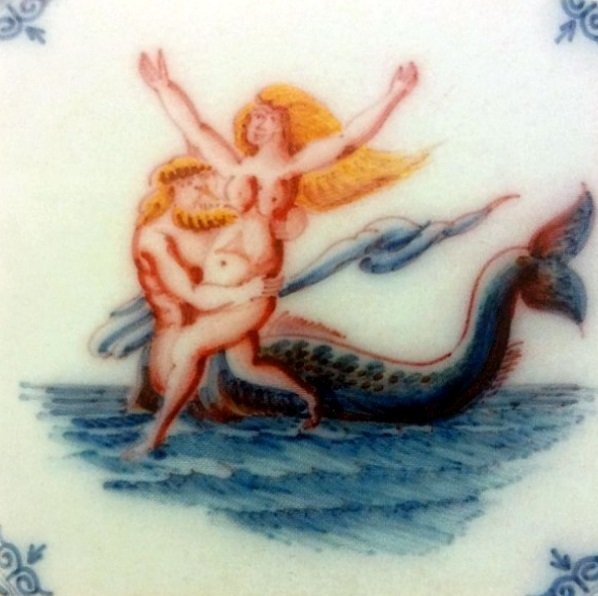 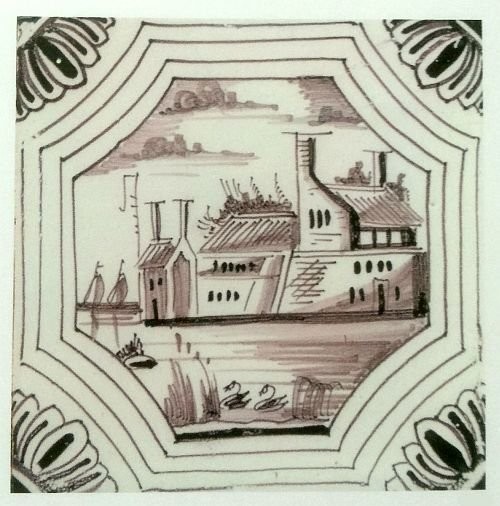 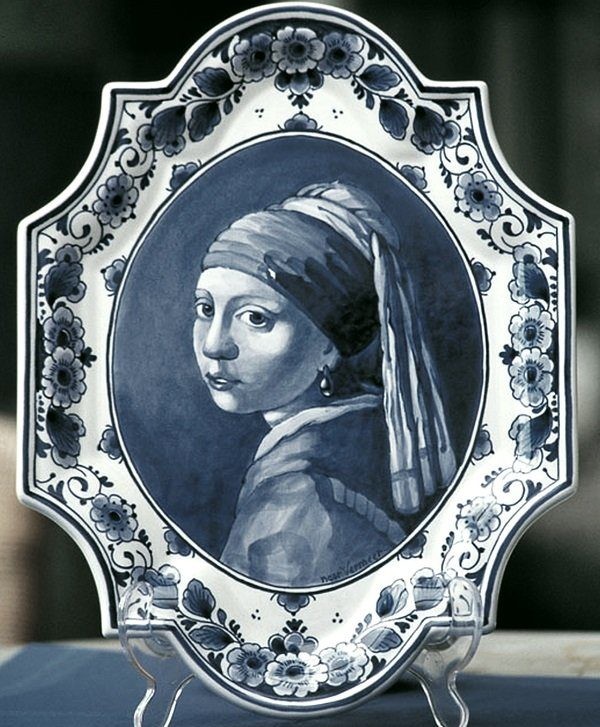