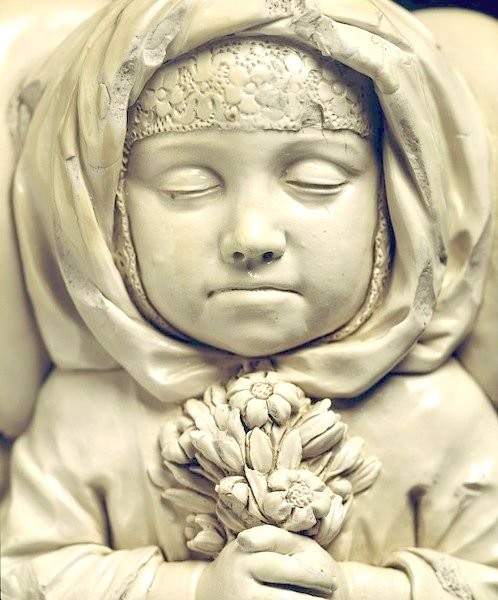 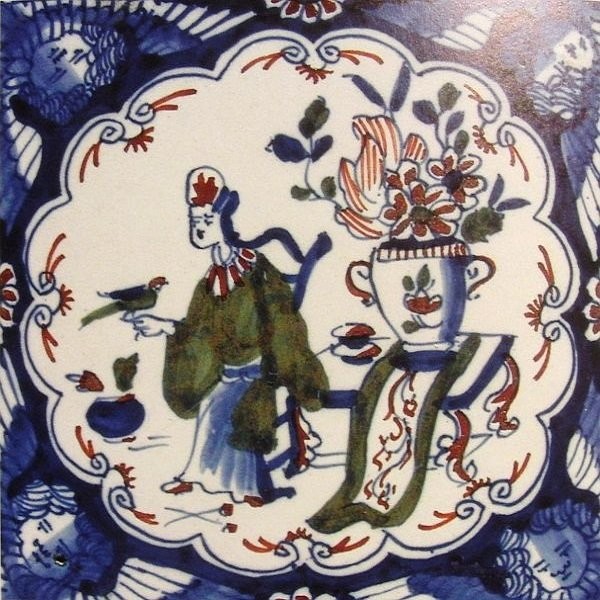 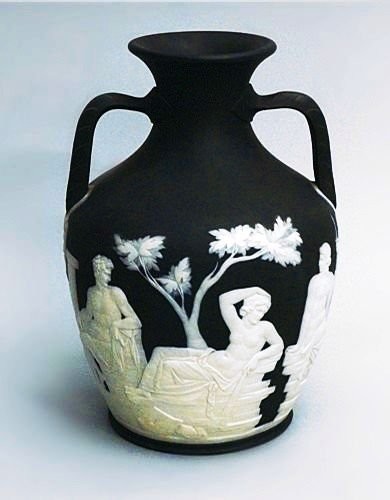 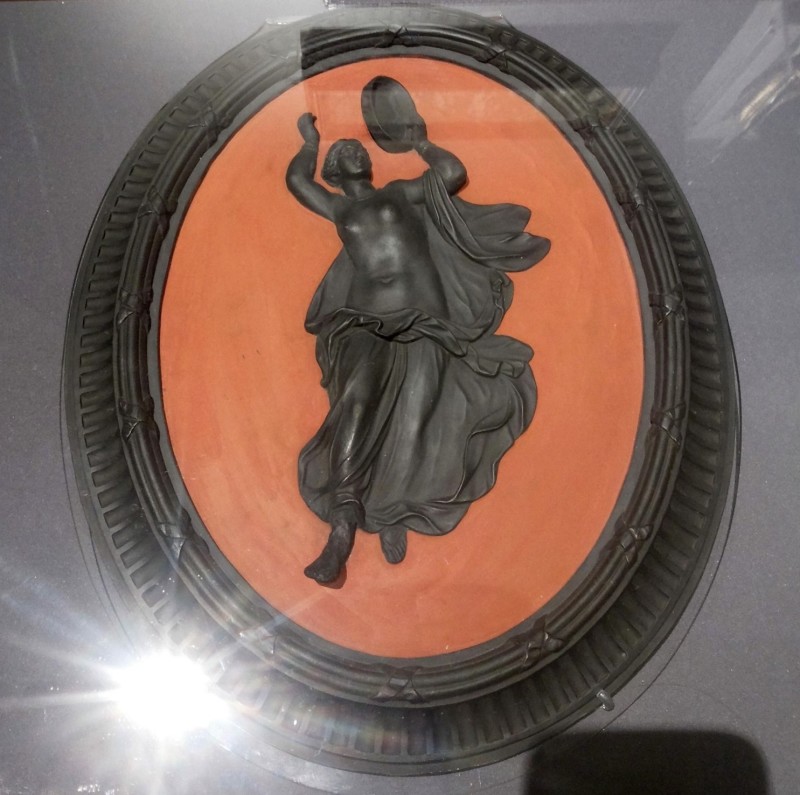 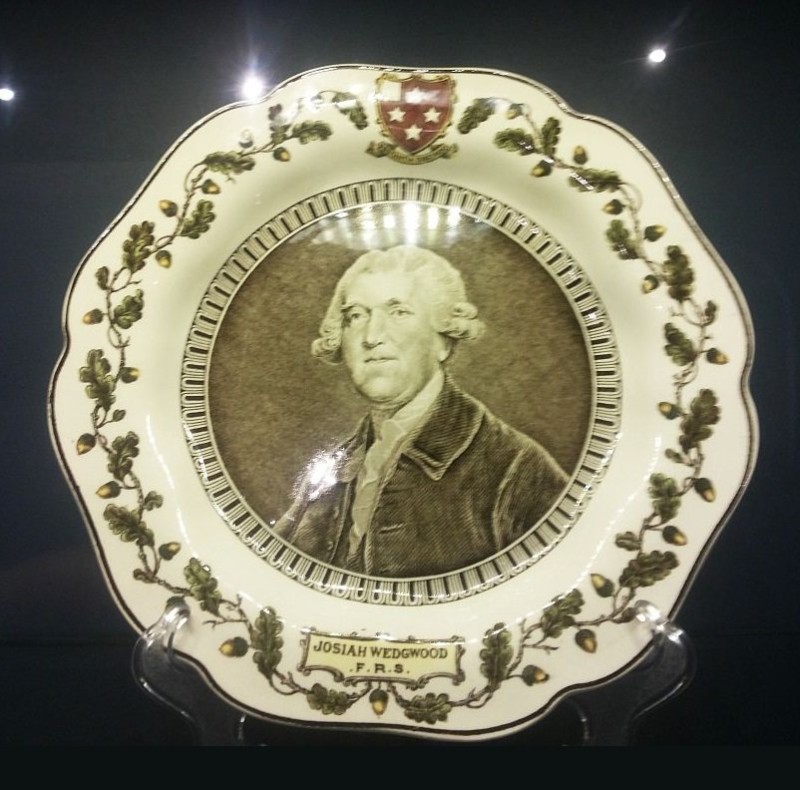 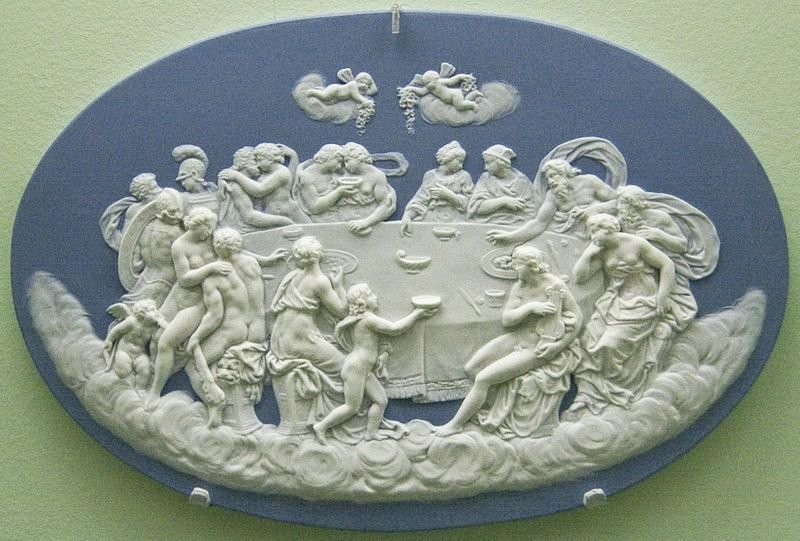 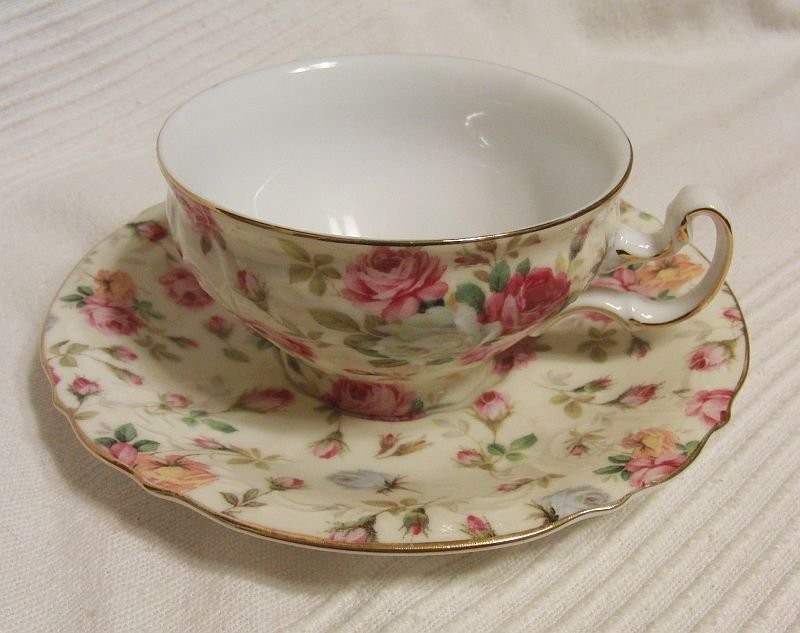 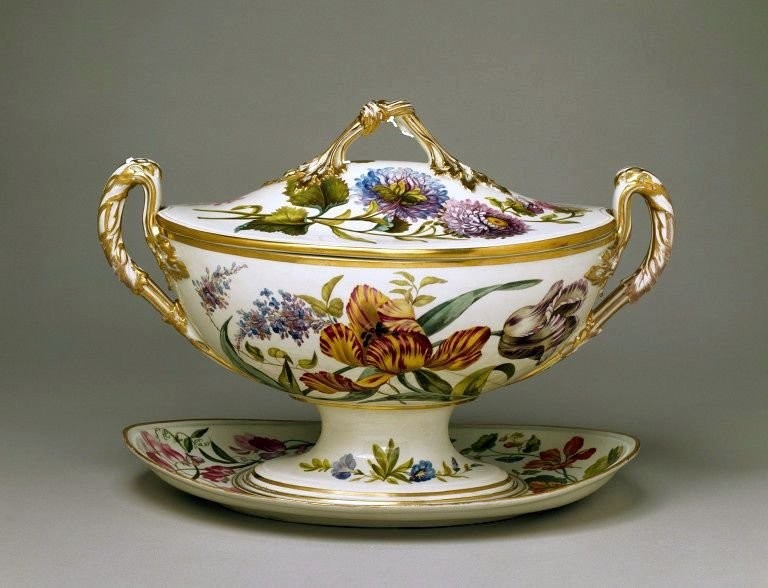 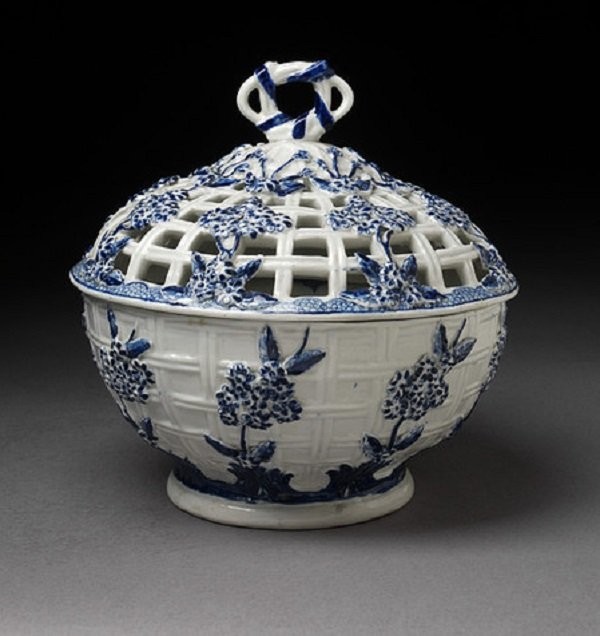 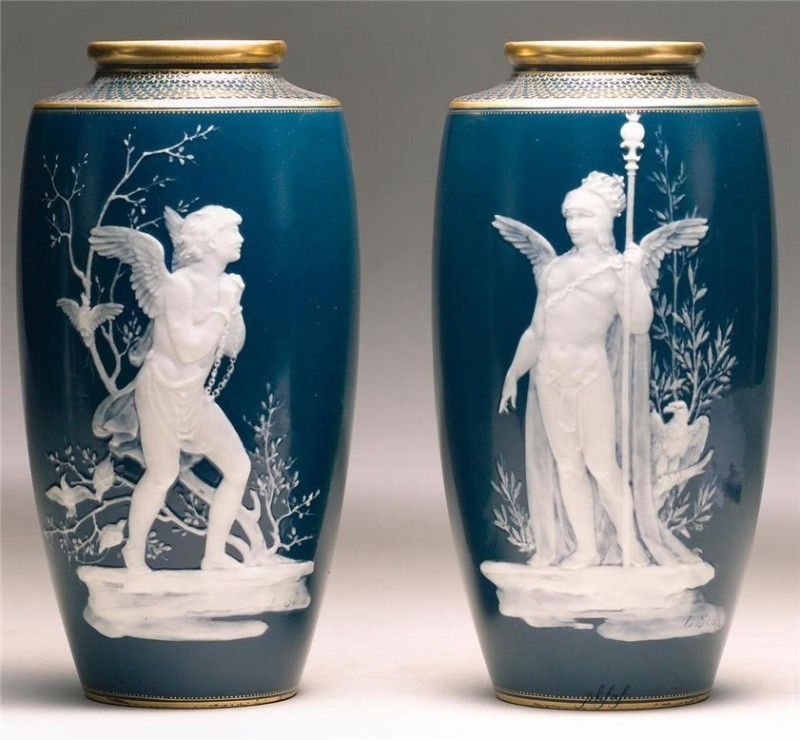 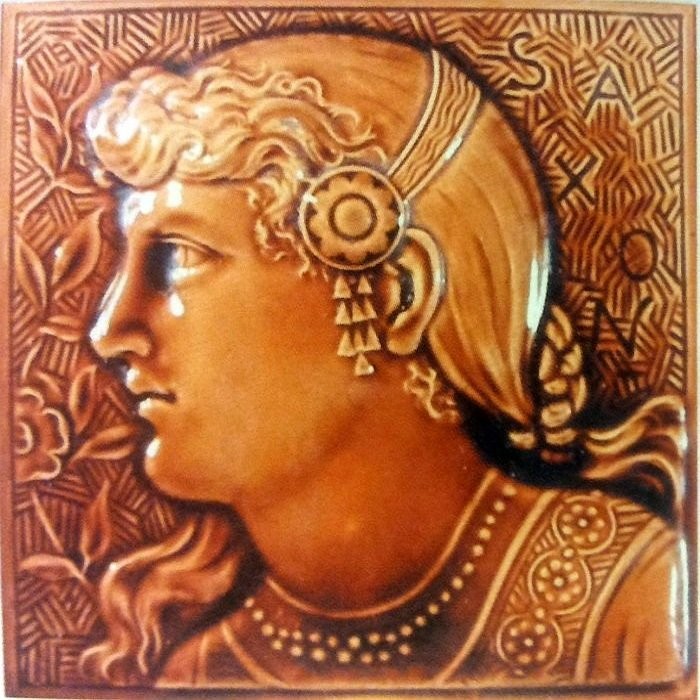 We have already been writing about the english art ceramic fireplaces of the Georgian era also referred to as the Regency era (1714-1830), however english art ceramics has a longer history starting from the end of the 16th century, from the era of Queen Elizabeth, the Virgin Queen. This period in the history of England is rightly called the Golden Age, since it was then that every single form of art, – theater, painting, and, of course, ceramics – was developed. Despite the fact that the first ceramics were brought to the islands by the Romans, after the Roman Empire had fallen the production of artistic ceramics practically went to a standstill, and their use was limited to purely utilitarian needs.

The era of Queen Elizabeth is characterized by the expansion of Great Britain to foreign markets and extensive trade with the Moors, Chinese and, of course, the eternal friends and rivals, the Dutch. In many English counties, people bought majolica from Italy and Delft, as well as porcelain from China. During this period, Chinese porcelain aroused ardent interest not only as an object of excellent trade, but also as an object of art, since the queen was an educated woman who spoke five languages, and who had a great taste in all that’s beautiful.

But despite this, the ceramic enterprises of Great Britain were not patronized by the queen, as was the case, for example, in France and the Netherlands, but developed as completely independent commercial businesses focused on meeting the demand. The queen set the fashion of the era, and the manufacturers successfully took advantage of it.

In general, it should be noted that the Anglo-Saxons have always shown remarkable commercial skills that enabled them to turn very peculiar industries in which it is extremely difficult to achieve commercial success into prosperous enterprises. Technologies that the British actively introduced at their plants were of no small importance.

It was in England that the so-called transfer-print technique was first used, a technique that allowed transferring any complex drawings to ceramics and porcelain without resorting to the services of expensive painters. But that was later; for now, John Dwight, a ceramist from Fulham, was developing his first salt glazes and sprigged decorations.

A significant driver for the development of english art ceramics was the spread of crafts by Delft craftsmen, who quite successfully copied products from China and Japan, despite not being made out of porcelain, but faience at best. However, since this ceramic produce was much cheaper than the original Chinese porcelain and was similar to it, the demand for it among the middle class and the bourgeois was quite high. Of course, the British could not miss such an opportunity.

John Dwight was a very meticulous man, so his technological research was crowned with success. In general, the quality of Dwight’s work is very high. It is enough to see the funerary sculpture of his daughter, Lydia Dwight, to marvel at the extraordinary accuracy and sophistication of every detail of this work – the mournful lips of the deceased girl, a lace kerchief on her forehead, a posy of flowers in her small folded hands. The transparent glaze on the girl’s face underlines the touching nature of her features and the deep sadness experienced by her parents. The sculpture is very emotionally charged and demonstrates the remarkable talent of John Dwight as an artist.

No wonder Dwight is called the father of English art ceramics, for all ceramists of England, without exception, grew on his works. Just as Michelangelo’s drawings at any art academy are a guide for beginner sketchers, John Dwight’s work and technology were the starting point for the further development of English ceramics and porcelain.

Many inventions were made in the fifties of the 18th century. Firstly, this is the technology of gypsum molding, which allowed for ceramics reproduction of and mass production.

Secondly, these were the so called stoneware, jasperware and basaltware. Thirdly, – new glazes, unusually close to the nature in their colors and textures. These glazes were invented by Thomas Wildon Fenton, a chemist and ceramist who produced service sets with sculptural decorations in the form of fruits and vegetables.

His works were so similar to real fruits and vegetables, their glaze was so ‘tasty’ that the sets were extremely popular and even copied at other ceramic factories in Europe.

Stoneware is a material very close in its characteristics to porcelain, having a dense sintered structure and low hygroscopy, but not white yet. It was invented by German potters, and John Dwight was able to repeat the recipe and achieve its producibility. Jasperware and basaltware were invented by the world famous Josiah Wedgwood, a ceramist from the dynasty of hereditary potters and one of Fenton’s students.

In 1768, he received a material of exceptional strength, able to withstand mechanical stress: it could be ground, cut, polished. Its main ingredient was heavy spar (baryte). In addition to its exceptional physical characteristics, basaltware was very inexpensive to manufacture, and despite that, it had excellent decorative qualities. It was actively used to imitate ancient Greek vases during the period of the return of neoclassicism and antique fashion.

Wedgwood’s story is also interesting in that it is an example of transformation of unrealized opportunities into outstanding inventions. When he was a child, Josiah injured his leg, so he could not fully engage in heavy physical work in pottery plants. Instead, Wedgwood devoted all his energy to research, also with the help of Thomas Wildon Fenton, who then became his teacher and business partner.

Wedgwood’s approach to ceramic production was based on chemical research. Perhaps his success could be owed to this attitude, since before him ceramists researched empirically, or via trial and error. There were clearly more errors.

His second unconditional merit was elevation of ceramics to high art. Wedgwood had an unrivaled taste, excellent commercial flair, which, combined with scrupulous research in the field of chemistry, turned his father’s pottery factory into an enterprise whose products delighted not only contemporaries, but also the future generations. Perhaps, no one has been able to outclass Wedgwood porcelain.

Wedgwood’s invention of ceramic wares was a great shift in ceramic technology, comparable to the invention of china (porcelain) itself. The development of many decorative techniques started by John Dwight, such as, for instance, sprigged decorations, formed the face of the Wedgwood empire for many centuries. Wedgwood cameos are absolutely unique. Even the inventors of porcelain, the Chinese, cannot boast of such mastery of material. Wedgwood used the translucent matte structure of porcelain and its high density to create works of art in which delicate creamy relief seems to glow from the inside, and multifaceted composition has a phenomenal accuracy of detalization.

Quite often Wedgwood saw someone else’s work and added something insignificant from himself, and as a result his work exceeded the original source, caused delight and frantic consumer demand. The Queen of Great Britain awarded Wedgwood the title of “Her Majesty’s Ceramist” when he was 36 years old. The imperial houses of Europe ordered dining and ceremonial service sets from Wedgwood. In particular, his most famous set is Service Set with a Green Frog made in 1773 for the Russian Empress Catherine the Second.

At the same time, in the middle of the 18th century, bone china was invented at the Spode factory in Staffordshire. Bone china still belongs to soft porcelains, but is distinguished by its whiteness, semi-transparency and ‘singing’.

In general, by the end of the 18th century, the highest number of manufactories in Europe were operating in Great Britain. Those included a manufactory in Bowe, where transfer-print technique was invented – transfer of a printed paper image to ceramic with subsequent firing – the progenitor of the modern decal; a factory in Chelsea (Chelsea porcelain factory), where glassy porcelain was invented, the factory specialized mainly in baroque figurines. It was combined with the manufacture of Bow porcelain and the Royal Crown Derby in 1766 by William Dewsbury; and many others, some of which work to this day.

It should be noted that the British did not strive to repeat Chinese products, and although there is a whole branch of ceramics named English delftware, the fascination with Delft motifs petered out by 1760. English affection for gardens and rose bushes inspired ceramists to actively use these motifs. Many painted, embossed details, often gilded, almost fully covered the figurines and utensils – this has become a signature trait of the English style, still recognized to this day and copied by many artists.

The Victorian era brought its own motifs and technologies. Often, they were simplified for the sake of mass appeal and, alas, to the detriment of quality, as happened with the famous porcelain factory in Worcester (Worcester Porcelain), another major UK enterprise.

From the middle of the 19th century, the flourishing of the Arts and Crafts movement began, which provided for a whole bunch of technologies and new graphic motifs.

You can read more about this in our article, William Frend de Morgan and the Arts and Crafts. 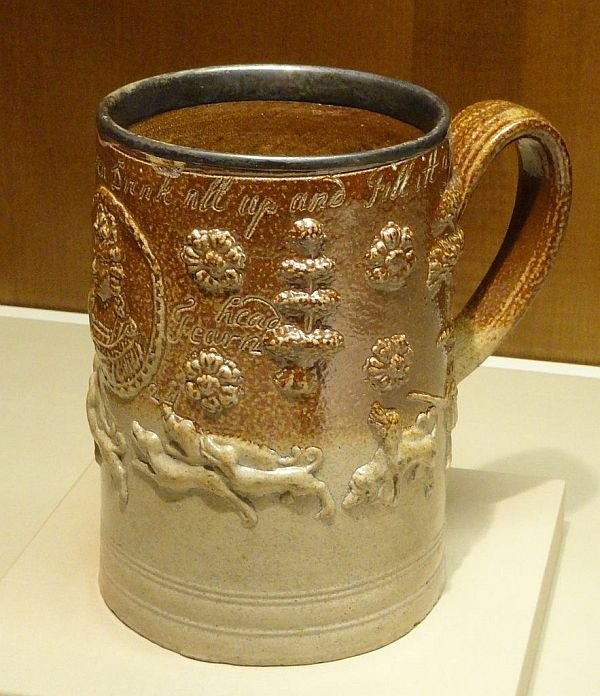 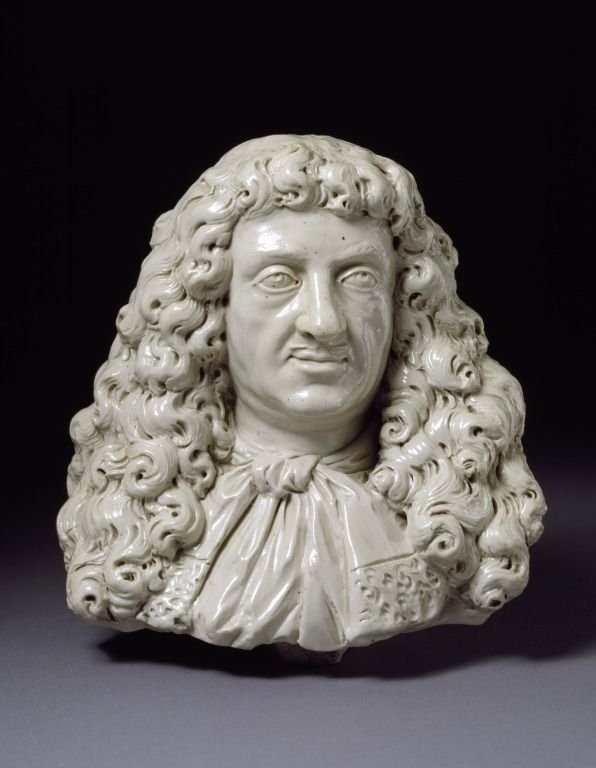 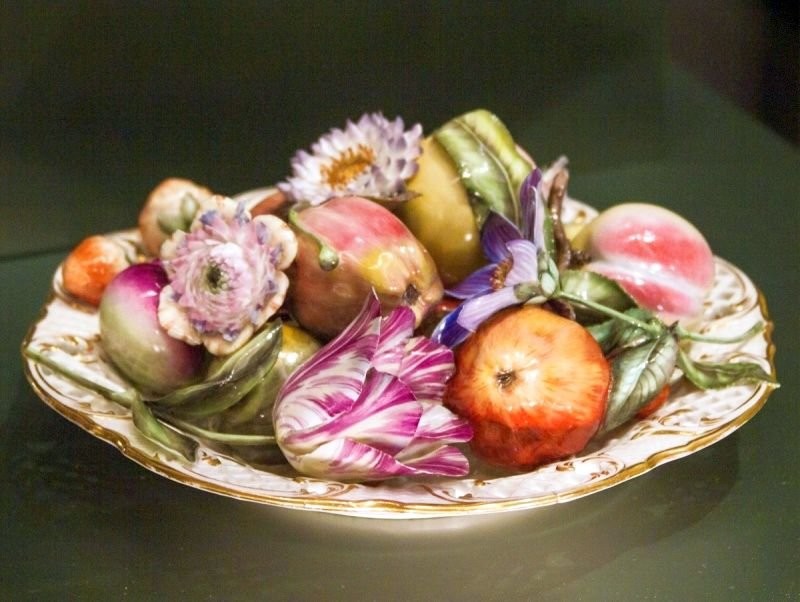 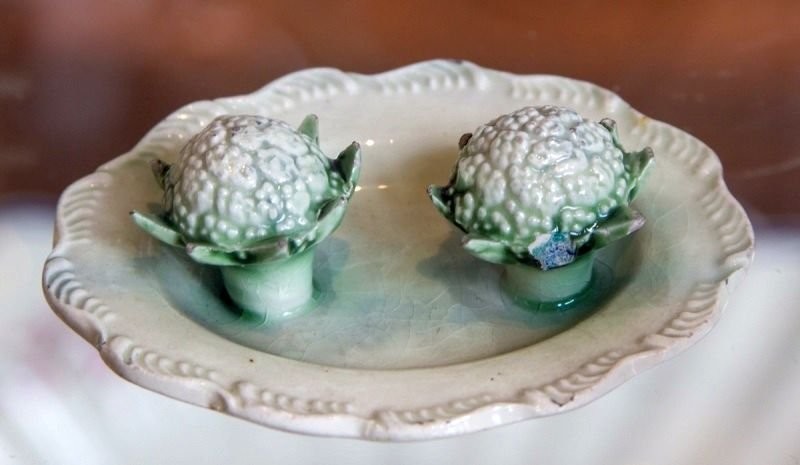 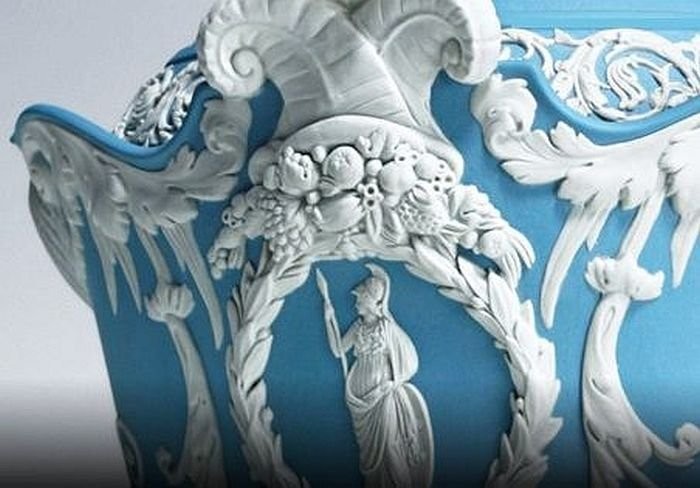 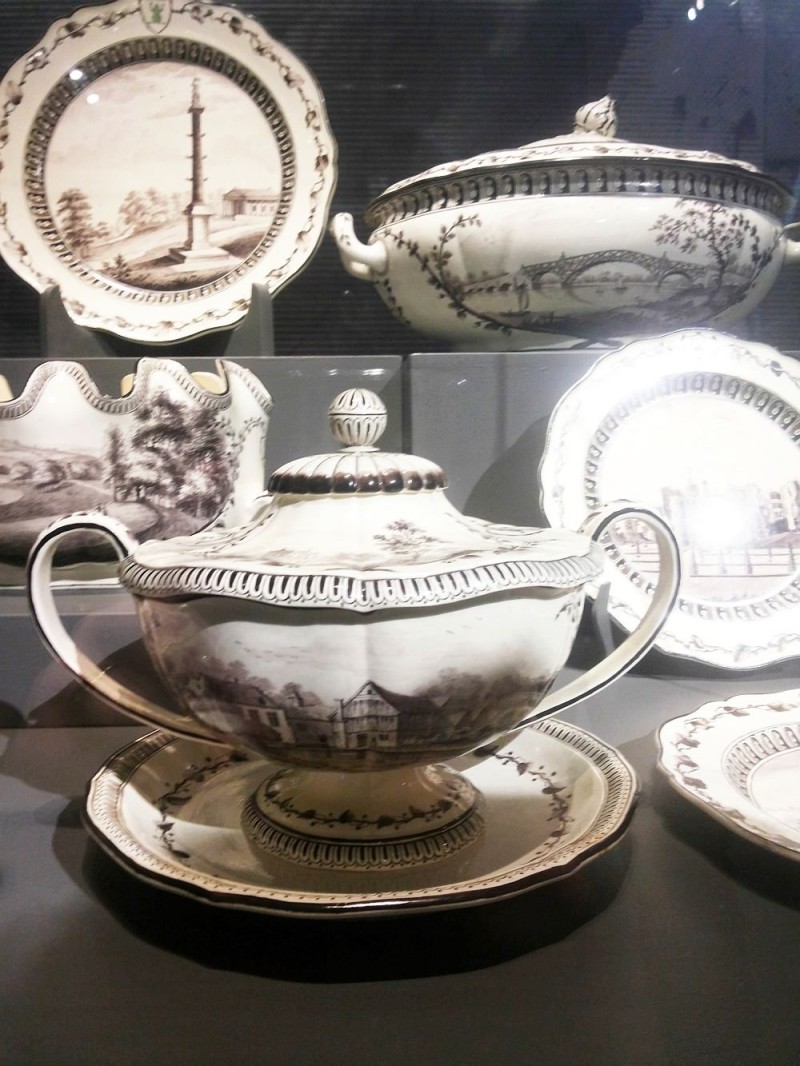 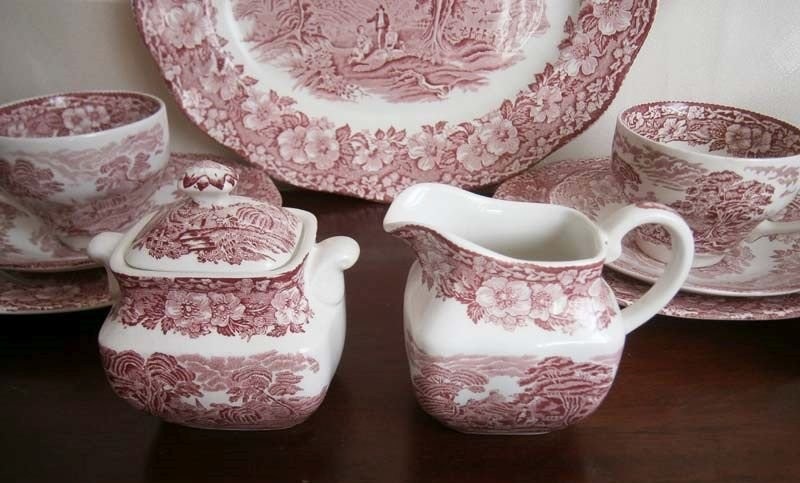 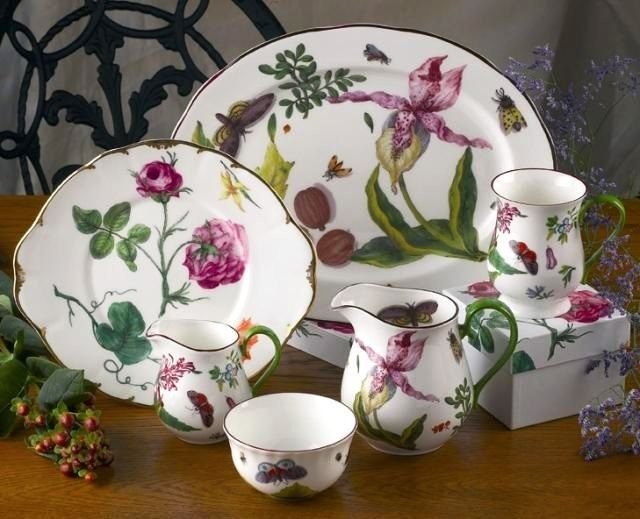 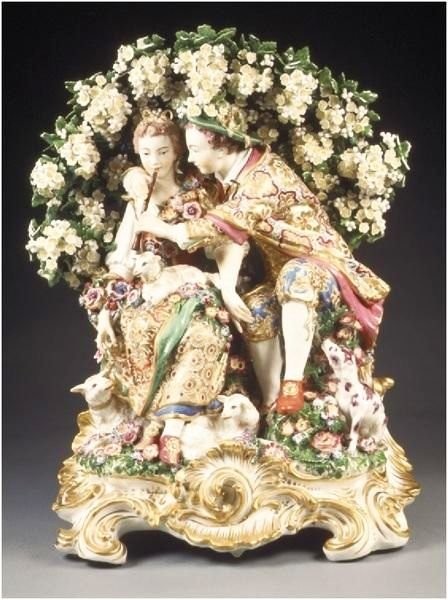 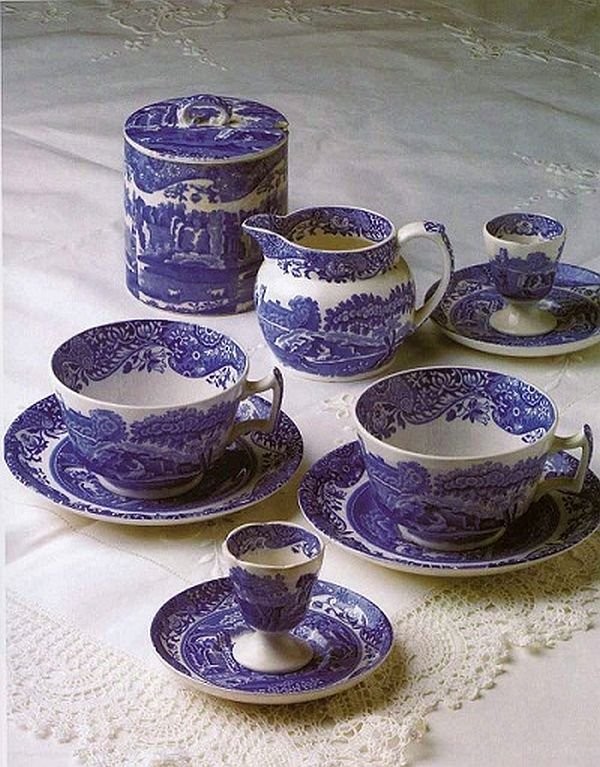 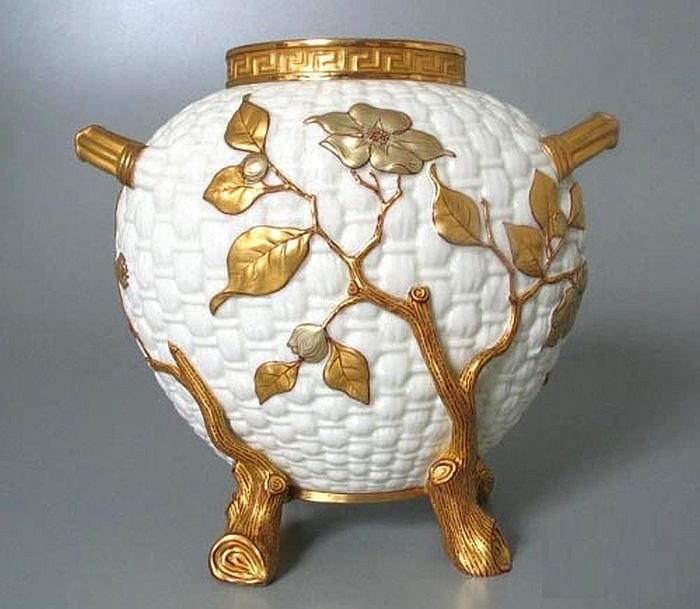 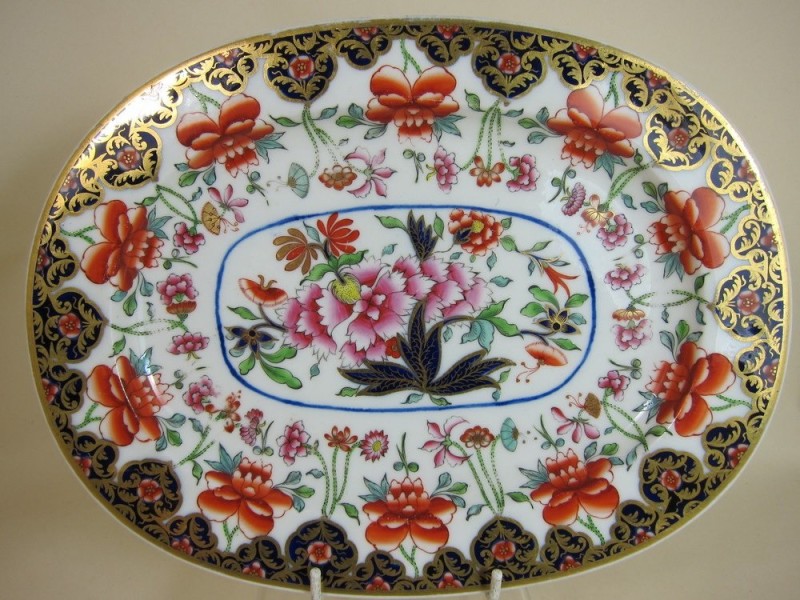