The Renaissance gave the world a lot of masters and artists. We already wrote about the Italian Renaissance in our article Italian Majolica of the Renaissance. Now we will talk about a French ceramist of the same period – Bernard Palissy – a French potter, enameller, painter, glazier and ceramist, as well as a writer and a great scientist, whose works are exhibited in the National Renaissance Museum in Château d’Écouen, and are also presented in the Louvre and the Hermitage. 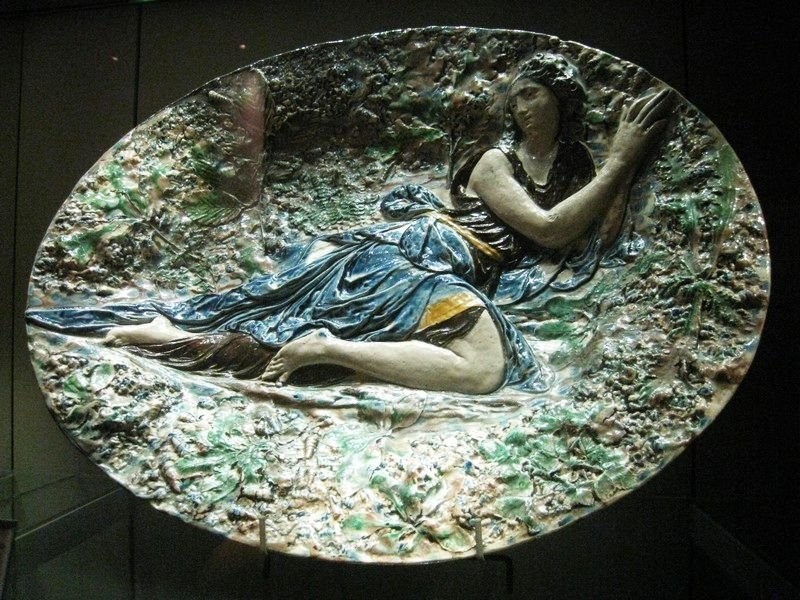 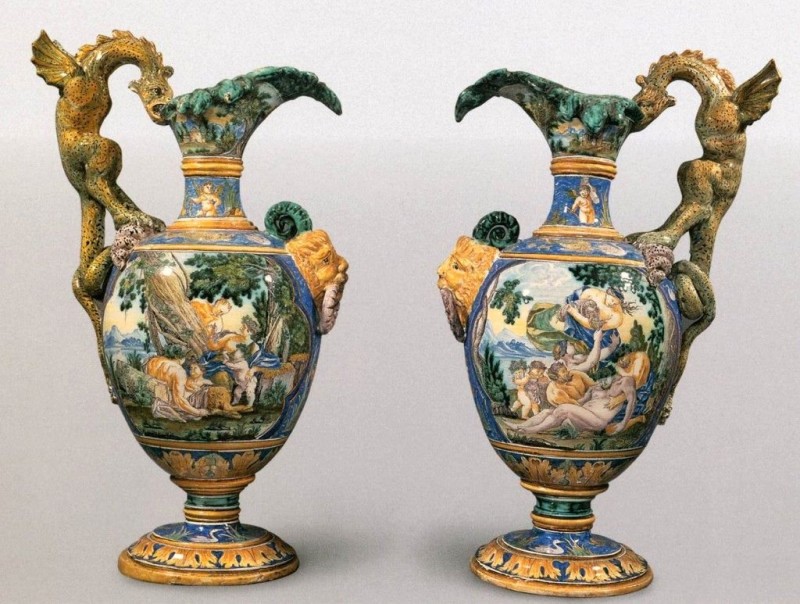 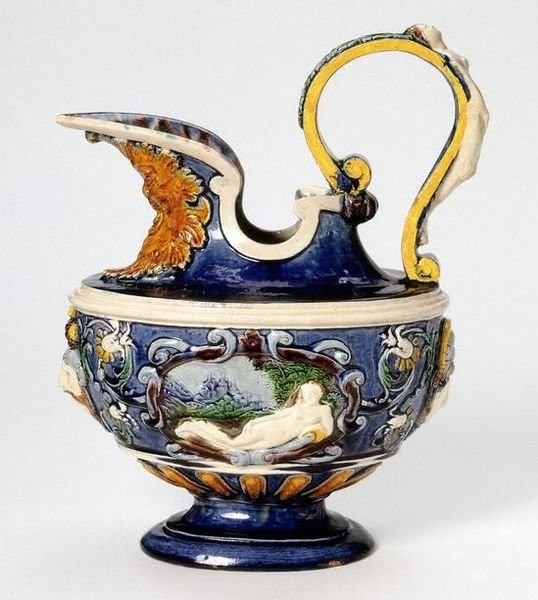 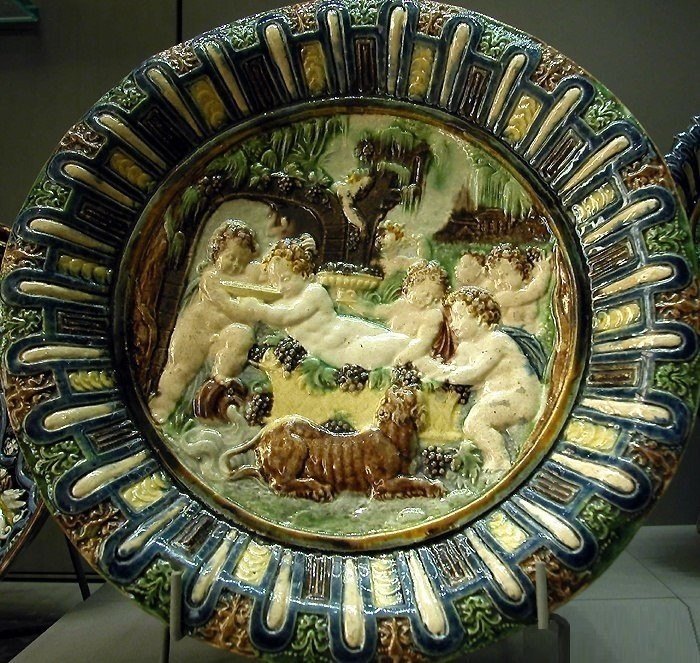 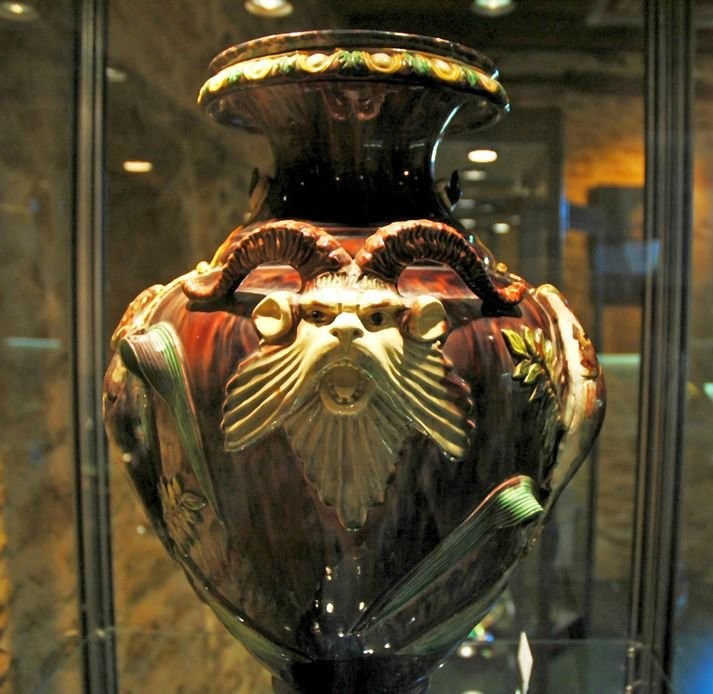 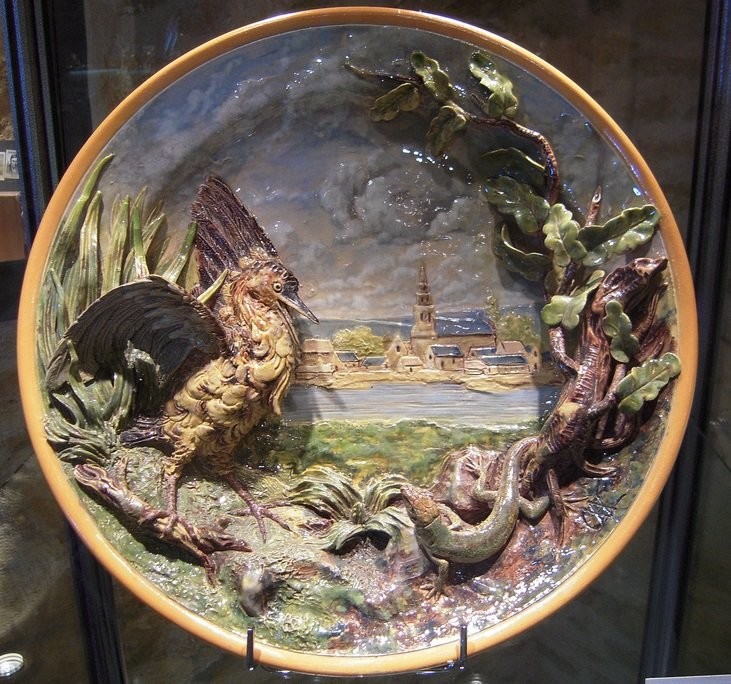 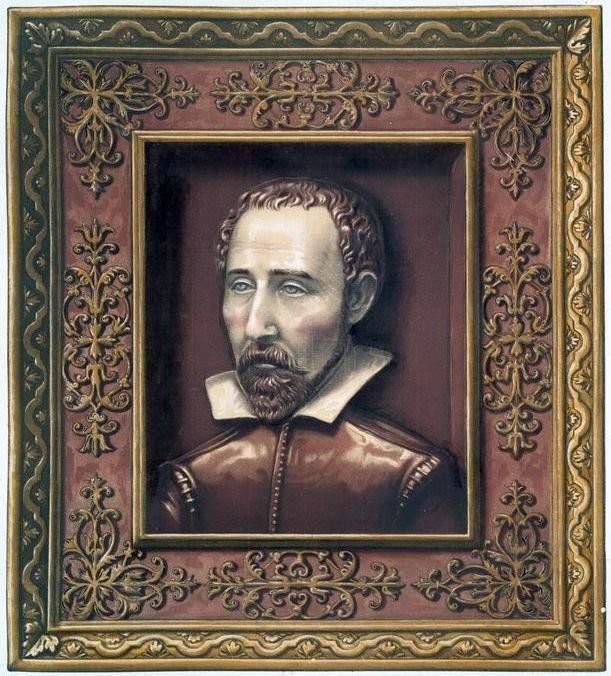 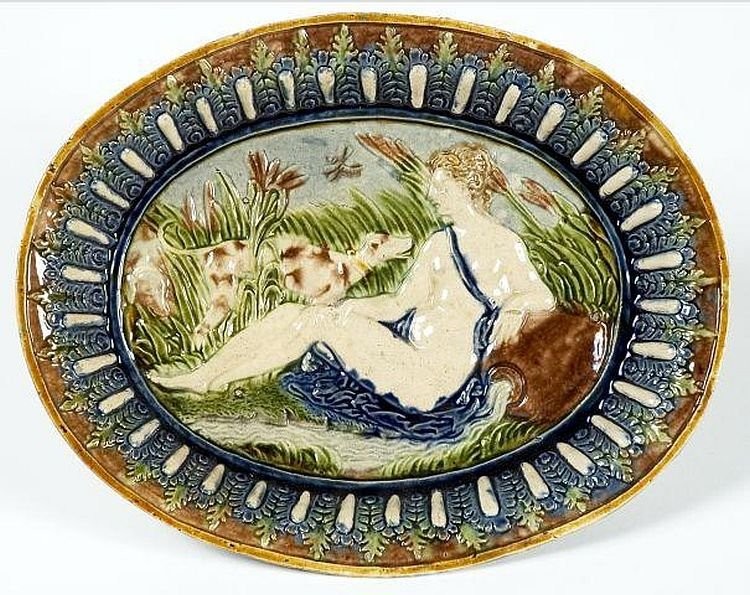 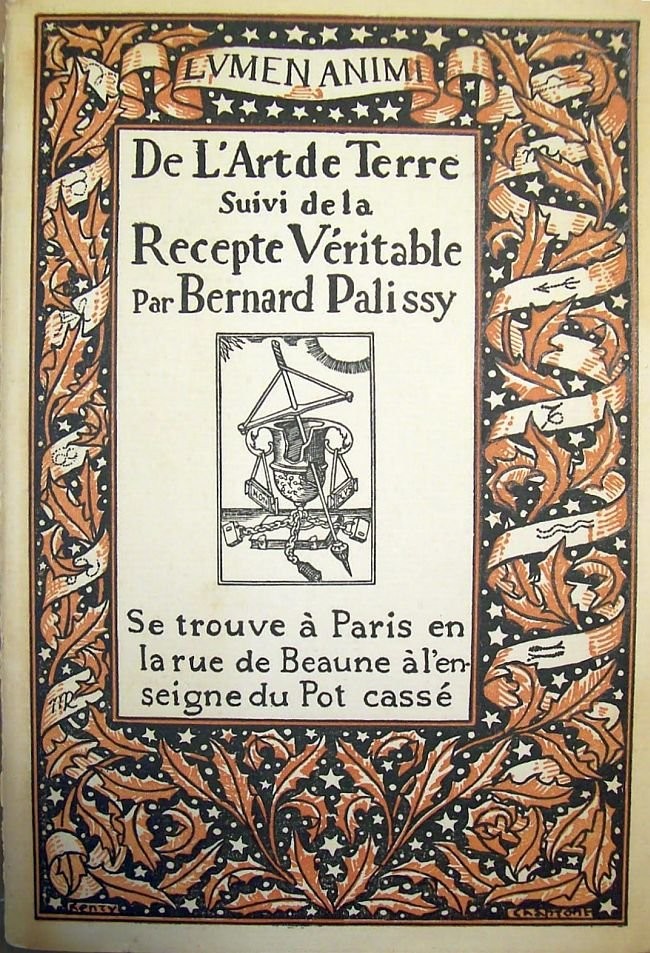 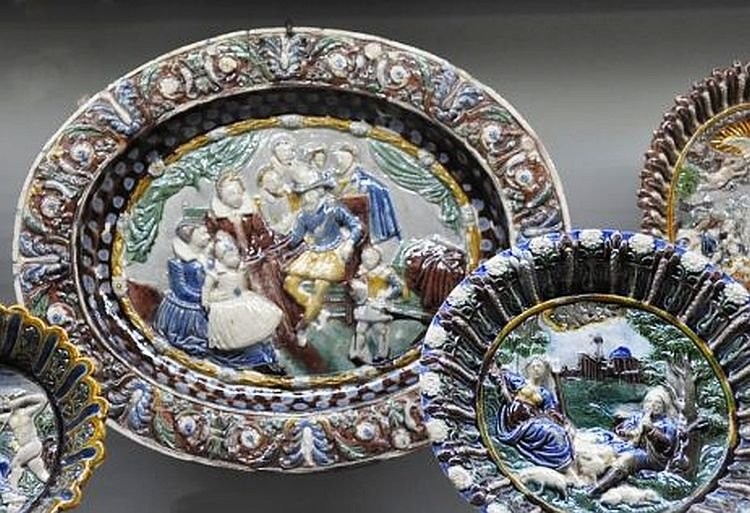 Bernard Palissy was born in the Saint-Avit village in Lacapelle-Biron around 1510 and died in Paris in 1590. As a boy, he got into a glass workshop as an apprentice and got very skilled in working with glass. Upon completing his training, as was customary in those days, Palissy traveled around the country in search of orders. He travelled half of Europe, went to Belgium, the Netherlands and Germany, and eventually settled in Saintonge, where he married and lived most of his life.

It is interesting that Palissy started making ceramics when there was a progressively waning interest in glass and sudden feverish demand for Persian and Italian majolica. It should be noted that at the time the French ceramic works were very brutalist and looked rather pathetic and unimpressive when juxtaposed with the lush flowering of polychromic Italian majolica with complex pictorial motifs and delicate painting. French ceramics of the late XV – early XVI century were very rough and simple. Therefore, it is not surprising that the Italian and Spanish majolica that sneaked into Northern Europe sparkling with pure colors and tints of multicolored glazes was literally breathtaking. The actively expanding successful trade of Italian workshops, especially of the Della Robbia family and Guido Andreas, excited French ceramists and forced them to experiment.

Bernard Palissy was lucky in the sense that his professional training as a glazier and his obvious analytical skills enabled him to perfect glazes, which are glass by nature. He completely succeeded in this work, but even he had to spend more than 20 years to achieve the brilliant transparency of his glazes and color depth comparable to deep lakes.

Around 1535, Palissy found a white goblet and begins to study the material, experimentally trying to achieve the same snow-white coating. Palissy probably found a Chinese porcelain vase, which back then already appeared among lovers of beautiful things and found esteem and popularity as an expensive rarity. Ignoring the nature of the vase, the composition and technological processes of making porcelain, he was desperately trying to discover the secret of the composition of the white ’enamel’, which, as he believed, was the color source. From 1536 to 1556, he devoted twenty whole years to his studies attempting to reproduce the glaze of this goblet. Once it seemed to him that he had already achieved the result. And so, he glazed several vessels and puts them in the kiln.

He fired this kiln for six days without sleep or rest, and when he took out the vases, he saw with bitterness that the glaze had not melted – he did not have enough fuel to kindle the kiln to the desired temperature. Then he throws all the furniture that was in his house into the kiln, dismantles the floor and fires the kiln to the desired temperature. As a result, he managed to achieve a very accurate imitation, and this opened a new period of Palissy’s work, a period of financial prosperity, since now his works were popular. Twenty years of physical and moral trials, his wife’s reproaches and neighbors’ ridicule, poverty and hunger, but he was able to create his own ’speckled’ glaze – shimmering with veins like marble.

Applied art bears in itself a part of the fine art designed to arouse the viewers’ emotional and intellectual response. Thus, in the works of Palissy people found something unusual, infinitely far from complete utilitarianism, able to entertain them and bring out emotions.

Palissy developed a technology for molding his products. Note that the first European gypsum forms date back to the fifties of the 18th century, which makes Palissy’s invention all the more important. as he used the same technology in the middle of the 16th century, two hundred (!) years earlier. Nature elements served as models for his molds: insects, amphibians, fish, flowers, plants, etc. Palissy had a brass dish on which he fixed his models – snakes, frogs, lizards and other amphibians and reptiles, decorated this composition with flowers and leaves, after which he filled the resulting still-life with gypsum. After drying, he had a gypsum impression in which he stuffed clay and thus made his dishes with very accurate relief images of living creatures.

It was amazing and very unusual. It should be noted that the quality of the relief of his works is deemed highly impressive to this day. The surfaces of his sculptures on dishes trace textures almost immaculately: each frog on a platter, each fish or snake have their own scales, almost completely indistinguishable from the real ones. In combination with amazing transparent colored glazes, Palissy’s dishes give the impression of an aquarium with living creatures underwater and it is very unusual and beautiful even by modern standards. These works of Palissy were called rural clay. Later, already in the 18th century, the English artist Wildon Fenton (the teacher of the famous Josiah Wedgwood) and the Minton ceramists recreated Palissy’s technology in their products. Thus, the famous ‘Wildon’ products were born – majolica fruits and vegetables on dishes indistinguishable from real ones (see the article on English ceramics).

However, Palissy did not dwell on ‘rural clay’, but continued to develop multicolor glazes and sprigged decorations in order to transfer paintings and sculptures of famous Renaissance artists to ceramics. In the 16th century it was customary to transfer the most beautiful works to other materials, in particular, to paint them on ceramics, – this was not considered plagiarism and, on the contrary, was a good tone and a sign of recognition of the artist. Thus, the grotesques and bas-reliefs of Palissy were born, recreated much later by other ceramists, in particular, Josiah Wedgwood at the end of the 18th century and Jean-Baptiste Stahl with his pate-sur-pate technique in Villeroy & Boch at the end of the 19th century. This Palissy’s technique was later called barbotine or barbotine ware and was also actively used in Sèvres and Limoges.

Palissy was unlucky to live in an ‘era of change’, full of the bloodiest events in French history. He was constantly arrested for his Protestantism and he got freedom only thanks to the patronage of the royal people, for whom he did a lot of art. He miraculously survived the St. Bartholomew’s Day massacre, thanks to the intercession of Catherine de Medici, for whom in 1566 he built a grotto (“a cave in a rustic style”) in Tuileries.

All this time Palissy wrote his treatise The Real Recipe, which became one of the most comprehensive textbooks on ceramic technology of the late Middle Ages. After 1574, Palissy conducted a very active scientific work based on chemical experiments and natural sciences. He gave lectures, conducted scientific courses in chemistry and technology of minerals, which were attended with great interest by very educated people of that time. – doctors, scientists, engineers. In 1580, Palissy published a second treatise, Admirable Discourses, of the Nature of Waters and Fountains, Both Natural and Artificial, of Metals, Salts and Brines, of Stones, Earths, Fire and Enamels, which is considered the first French mineralogical publication.

In December 1586, he was again arrested as a Huguenot, and sentenced to exile. However, he remained in Paris, where he continued to teach and perform chemical experiments.

In May 1588, Palissy was imprisoned in the Bastille, where two years later he diedfrom hunger, cold and poor treatment.

And just like that passed away one of the most prominent ceramists in history, comparable with the great Leonardo in contribution to world of science and culture.

Bernard Palissy was one of the few ceramists in the world whose merit was chemical research and unique pieces of ceramics. Although Palissy failed to unravel the secret of Chinese porcelain (apparently, it wasn’t the time yet), he created new styles and technologies in ceramics, reformatted Italian art on French soils, and in the end made his own highly considerable contribution to the development of world arts and sciences. 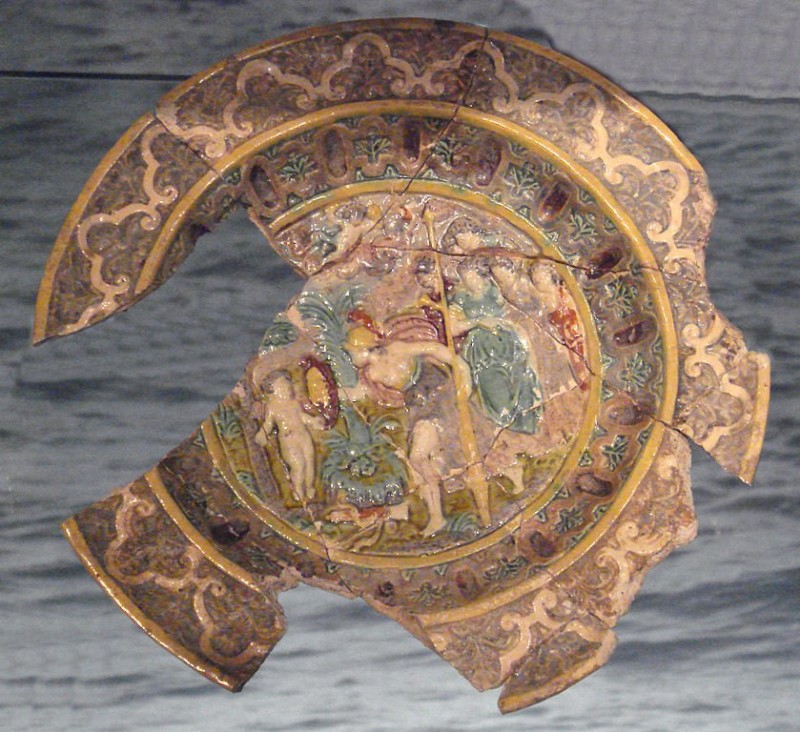 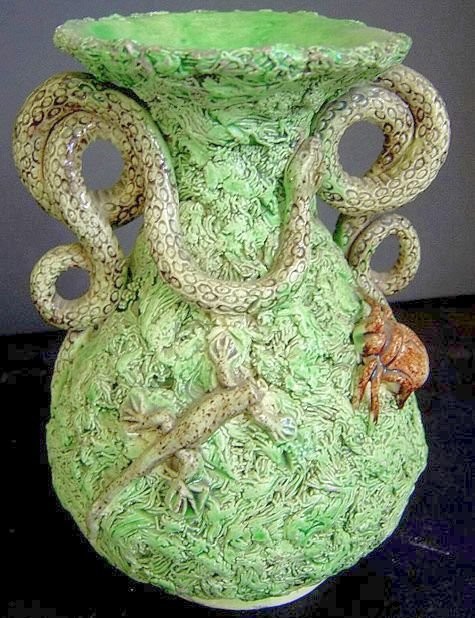 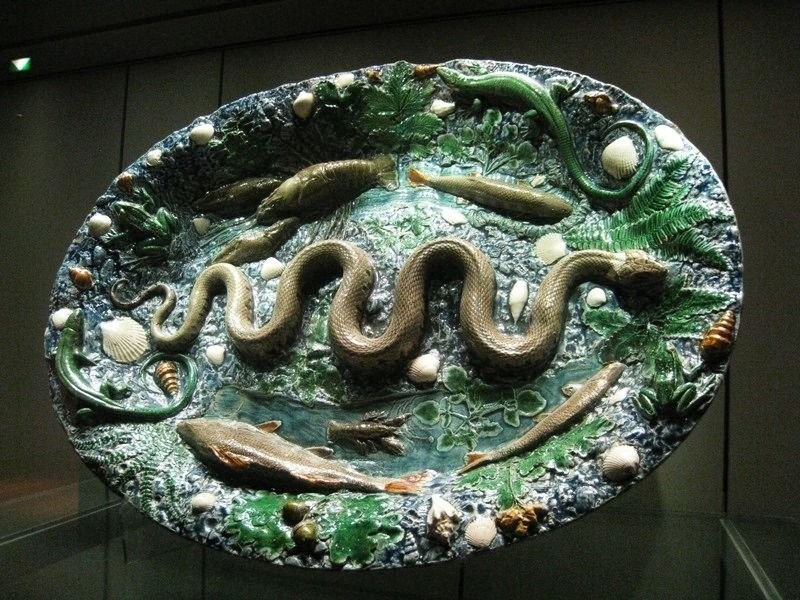 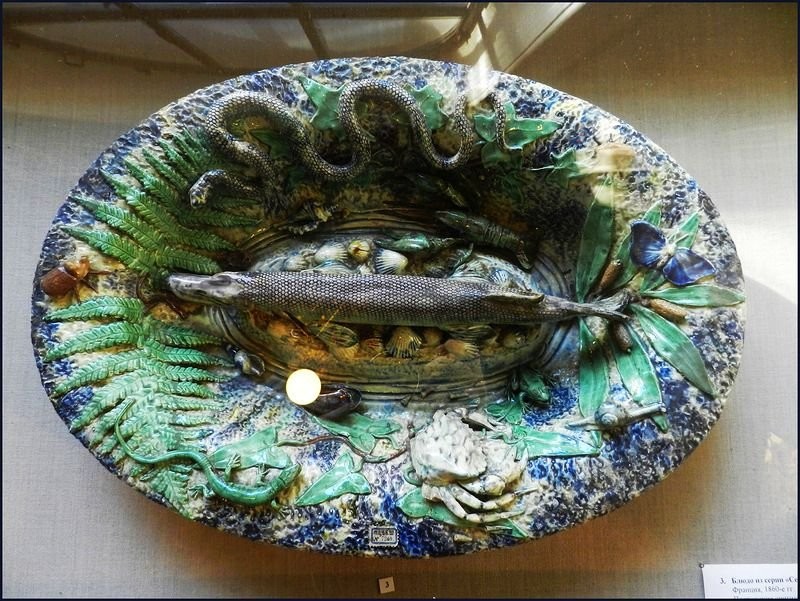 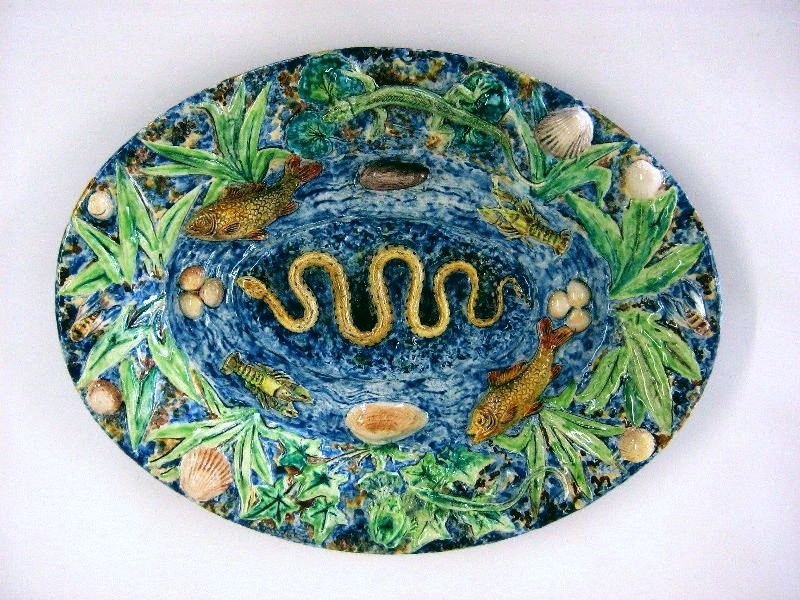 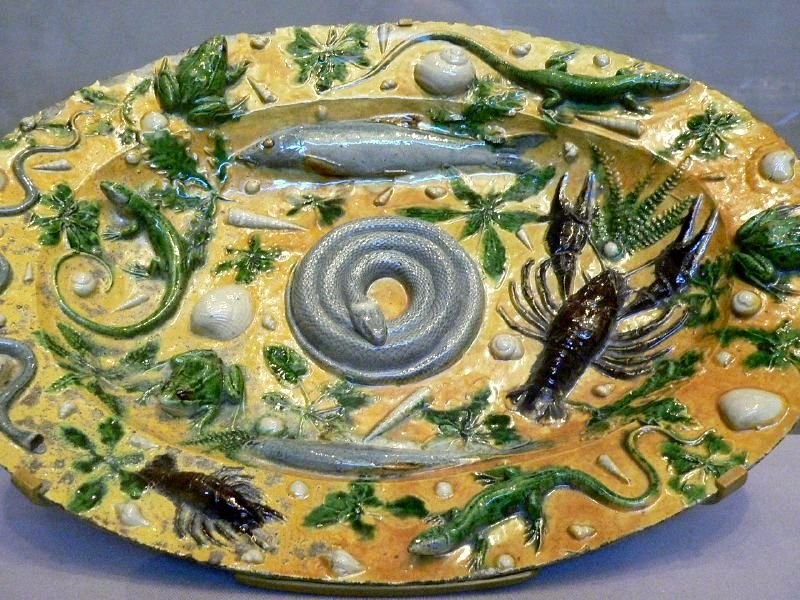 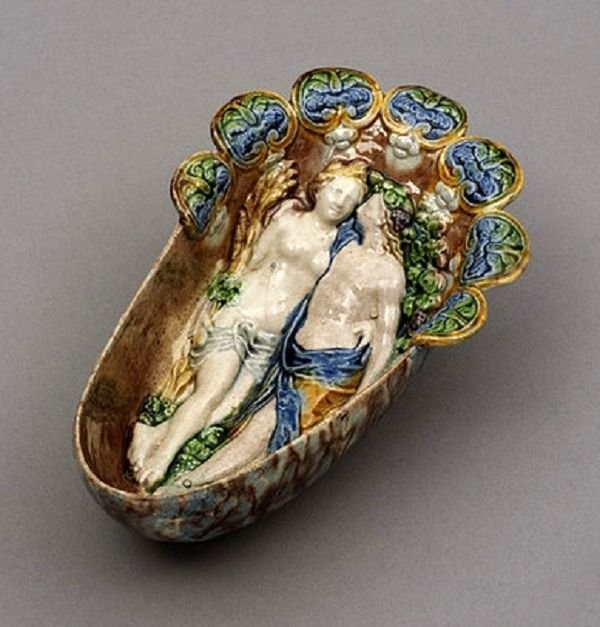 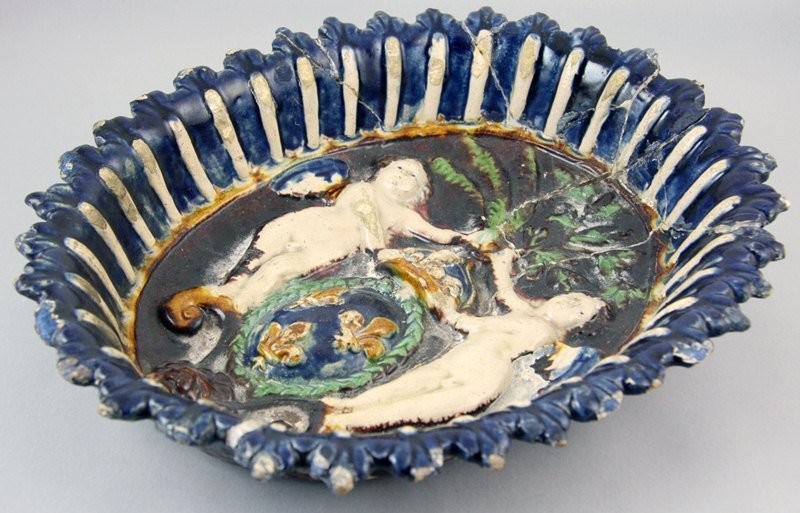 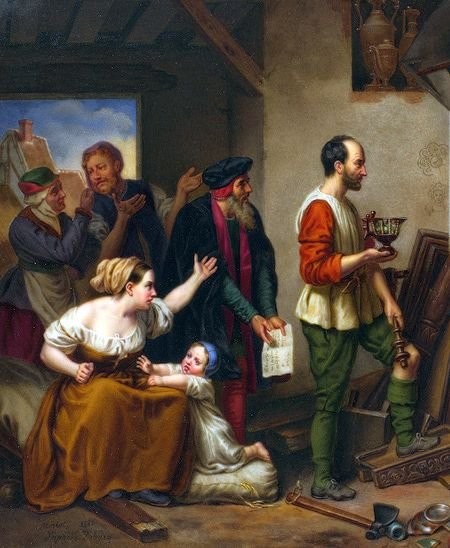